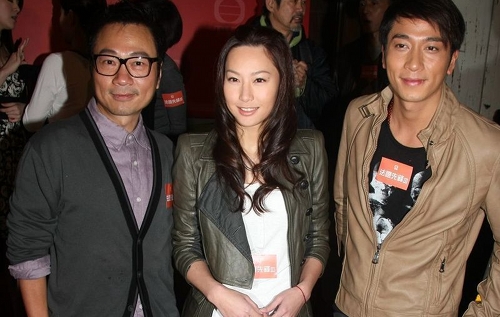 Recent tabloids claim that Kate Tsui Chi San had numerous outtakes while filming Forensic Heroes 3 <法證先鋒Ⅲ>. In one dancing scene, Kate had five or six outtakes. Allegedly, she often stood in the wrong position during filming, resulting in numerous outtakes and delaying the filming progress. Due to Kate’s outtakes, the cast and crew worked late to compensate the loss in time. Allegedly, Kate incurred the wrath of many cast and crew members.

Allegedly, Kate frequently did not study the script until arriving at the shooting location. While filming Beauty of the Game<美麗高解像>, Kate frequently forgot her lines.  Due to Kate’s “memory loss,” this caused the cast and crew to work overtime. An inside source said, “Perhaps Kate is too busy and has no time to memorize the script in advance. When it is time to film the scene, she will skim her lines. The production assistant frequently has to remind her of the lines. Since there is scientific jargon in the script, there is no room for mistakes!”
On February 18th, Kate was filming a dancing scene with Forensic Heroes 3 co-stars, Ron Ng Cheuk Hei and Sire Ma Choi. Since the scene did not require any dialogue exchange, it should have been an easy scene to film. Unfortunately, Kate stood in the wrong position, resulting in outtakes. Prior to filming the dancing scene, the production crew requested the TVB dance department to train Ron, Kate, and Sire two weeks ahead of time. Allegedly, Kate called in sick each time and could not attend the dance practices. No wonder there were five or six outtakes!

When reporters asked Kate about her frequent outtakes, she exclaimed, “Who told you that? Was it the director? That’s not true! I had a cold earlier, but I am feeling much better now. Everything is alright!” Furthermore, Kate denied that she had frequent outtakes due to lack of memorizing the script.

Kate noted that the strong winds blew her hair messily in an earlier dance scene, resulting in the outtakes. “The news is fabricated; there is no need to pay attention to it! The filming lasted until 6AM and the ocean winds were very strong. It is understandable to make a few mistakes! I was even filming during Lunar New Year’s while I had a fever! I am a very serious artist and put my best efforts into my acting!”

Since Kate portrays a police officer in the series, she often has to carry case file folders in her scenes. As a result, she inserted a copy of the script into the file folders so that she can glance at the dialogue during filming.

Former co-star, Kenneth Ma Kwok Ming, commented on Kate Tsui’s memory skills, “Her memory is not bad! She will not have any outtakes while filming three or four scenes. That’s not too bad! There are plenty of people who are worse!”


Wayne Lai Yiu Cheung said, “It is not a frequent occurrence for Kate to forget her lines. Even if it happens, it is because her role is the most strenuous one among the cast! Since she is a police officer, she has a lot of action scenes.” Jayne: Highly promoted artists, such as Kate Tsui, are busy filming and make appearances at promotional events. So with lack of sleep, perhaps there is also lack of adequate memorization of the lines ahead of time.