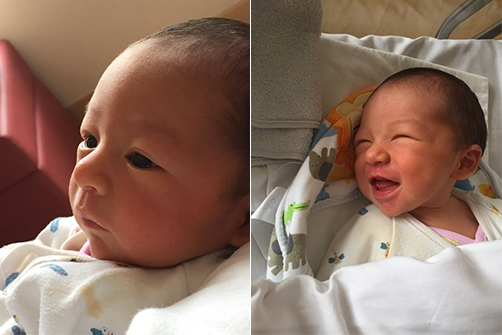 Hong Kong supermodel Kathy Chow (周汶錡) introduced her son to the world today, sharing a picture of her week-old son Jacques Lepeu on her Weibo.

“Here he is!” wrote Kathy. “Little Jacques has finally arrived into our family.”

Kathy gave birth to little Jacques on July 3 at the Conossa Hospital, weighing at 7.2 pounds. Her husband of French ethnicity, Julien Lepeu, was with her the entire time. Kathy and Jacques were discharged from the hospital on July 8.

On July 12, Kathy released a statement and some photos of the adorable Jacques to the media. She said her family has decided to give Jacques the Chinese name Lui Kai Yu (雷棨宇).

Kathy said she still finds it unbelievable that she has given birth to a little angel. The 41-year-old, who gave birth to Jacques via Caesarean section, stated, “The process was not as difficult as I imagined. I am afraid of pain, but the surgery was done smoothly, and I did not feel pain at all. I am still not used to the feeling of being a mother, haha! Thankfully, we have hired a nanny who is around all day to take care of the baby. As of now, the baby only knows how to drink milk, cry, and sleep. I still don’t know how to change his diapers or wash him, but I am learning. As for my husband, he loves to feed him and change his diapers.”

Although Kathy’s younger sister, actress Niki Chow (周麗淇), is not in Hong Kong due to work obligations, Niki calls and texts Kathy everyday to ask about Jacques. “She’s always asking me to send her pictures of the baby!”

On asking who Jacques resembled more, Kathy said, “He definitely looks like his father more. Some people say he looks like Julien’s father. When the baby is sleeping and dreaming, he laughs, and that’s when they say he looks like me the most.”