Kelly Fu Slips That She Is Seeing Ron Ng 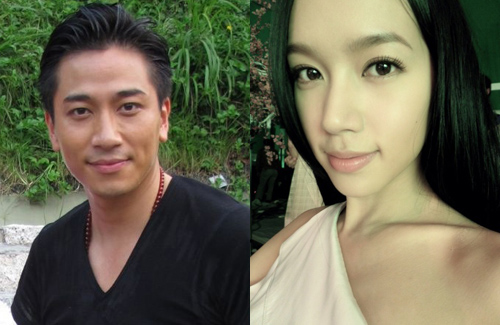 Ron Ng (吳卓羲) was shrouded with negative press during the months he dated mainland Chinese model-actress Viann Zhang (張馨予). After the pair’s very public breakup last year, Ron swore to focus on his career. Claiming that he was in no hurry to date, Ron stated that he was much more interested in earning money at the moment.

However, it has not even been a year since Ron returned to bachelorhood, and the Hong Kong media claims that he already has his eyes on someone else. His Triumph in the Skies 2 <衝上雲宵II> costar, model Kelly Fu (傅嘉莉), slipped to the press that she is currently seeing the 33-year-old star.

Kelly admitted that she prefers dating men who are filial, loving, sensitive, responsible, and have a sense of humor. When asked if Ron had come up in her mind, Kelly smiled sweetly and said, “It’s true that Ron is humorous. I’m a very serious and anxious person myself, so I need someone in my life that can make me happy.”

Kelly revealed that her fondest memory of working with Ron was when they were filming in Sanya, Hainan last summer for Triumph in the Skies 2. “It was a really hot day. We were all having a tough time, but Ron would suddenly start singing these really ridiculous songs, and would rap nonstop. It was so funny that I couldn’t stop laughing even when the director yelled action!” Kelly gushed.

She softly added, “It was hard times for all of us, especially for him, yet he still had the energy to make us happy. It’s not easy!”

At the mention that Ron is currently shooting a new mainland Chinese drama, Kelly nodded and said, “He is really, really busy. Don’t give him any more unnecessary pressure.” She then slipped that she is currently seeing the TVB actor. “We just started. He works really hard and I really don’t want certain things to impact our careers. It’s not worth it.”

Asked if she would consider a serious relationship with Ron, Kelly said, “I really don’t know what would happen in the future. If I said no today, I would probably be slapping my own face the next day.”