Kenix Kwok Unsure if Younger Brother and Lynn Hung Will Get Married. 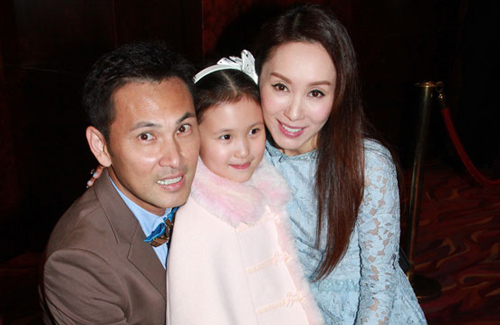 Frankie revealed that Tania will be turning six years old in January. On whether he would be planning a lavish birthday party for her, Frankie said, “I wouldn’t do anything too extravagant, as I don’t want her to become materialistic or money-minded. This can wait until she grows up.” Kenix added that Tania is generally a very well-behaved child and would not throw tantrums over toys.

Kenix was then asked if she would be inviting Lynn Hung (熊黛林), who is dating Kenix’s younger brother, Kwok Ho Chung (郭可頌), to Tania’s birthday party. Kenix responded, “I don’t think she will be in the city.”

Did Kenix discuss the possibility of Ho Chung getting married when they were on holiday earlier? Kenix expressed, “We spent most of the holiday eating and relaxing. We had a lot of fun and didn’t really have serious conversations.”

As for whether Ho Chung would be getting married in 2016, Kenix said, “The most important thing is that they get along well. It’s all up to him.”

On whether she was considering having another child in 2016, Kenix said nonchalantly, “It doesn’t really matter to me.” At this point, however, Tania walked forward and said cheekily, “I want to be a little sister. I wish I had a big brother.” Kenix laughed and said that Tania had expressed such a wish before.

5 comments to Kenix Kwok Unsure if Younger Brother and Lynn Hung Will Get Married.