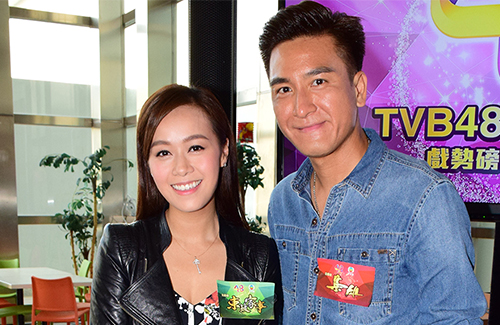 Jacqueline Wong’s (黃心穎) making all the fangirls jealous. According to Hong Kong paparazzi, the former Miss Hong Kong runner-up has been dating Kenneth Ma (馬國明) since mid-2015, when the two collaborated in TVB’s Inspector Gourmet <為食神探>.

Jacqueline has always been a fan of Kenneth. In 2013, Jacqueline debuted her first acting appearance as a guest character in The Hippocratic Crush II <On Call 36小時>, collaborating with Kenneth. She expressed at the time that Kenneth was her idol, and wrote on social media, “I can’t believe I gave my ‘first’ to Kenneth Ma!”

Originally just idol and fan, sources say their relationship took a positive turn in the spring of 2015, when the two shot their kissing scene for Inspector Gourmet. Kenneth reportedly fell for Jacqueline and the two started their relationship. However, not willing to compromise their careers, Kenneth decided that it would be better if both of them stayed underground. Jacqueline was reportedly spotting buying a wristwatch worth $10,000 HKD for Kenneth; Kenneth was also seen driving Jacqueline home in the middle of the night.

Jacqueline has since denied her dating rumor with Kenneth. Though the 27-year-old did not say no to the possibility of dating someone like Kenneth, she stressed that she is still single. She said in the phone interview, “Whether or not you consider him a ‘good deal’ really depends on your taste. I don’t really have a type. It’s all about the feel.”

The actress was asked again about her dating rumor with Kenneth when she went to work for Miscellaneous Police <雜警奇兵>. She said, “I am not dating!” (No room for development at all?) “We are friends!” (Was he really your idol?) “I wasn’t in showbiz yet. Those of us who watch TV have their own favorite actors. It’s great to be friends now!” (Did he pursue you?) “I don’t think so! He’s rather shy.” (Rumors say you pursued him!) “I didn’t!”

Jacqueline and Kenneth will be collaborating again for TVB’s upcoming grand production Deep in the Realm of Conscience <深宮計>, and will reportedly play a couple.