Kenneth Ma and Tony Hung Are Not Awkward With Each Other 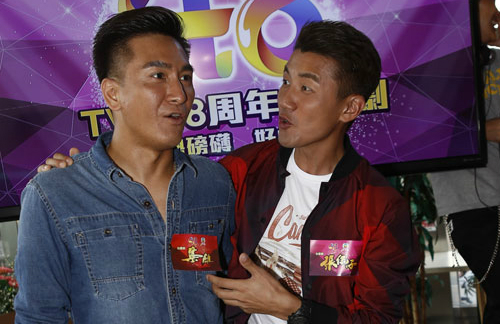 TVB held a grand press conference to promote its four anniversary series of 2015, which includes Captain of Destiny <張保仔>, With or Without You <東坡家事>, Under the Veil <無雙譜>, and Lord of Shanghai <梟雄>. Although several artistes were present, it was the first time that alleged love rivals Tony Hung (洪永城) and Kenneth Ma (馬國明) appeared at the same event. While Tony persistently pursued Natalie Tong (唐詩詠), Kenneth was spotted dining out with the actress on numerous occasions.

Tony and Kenneth did not appear awkward with each other at all. They had no attempt to avoid each other and instead stuck together like old friends. Onstage, they chat constantly and even posed for a photo as Kenneth put his arm around Tony’s shoulder. When questioned by reporters, Kenneth explained there is no awkwardness at all, and that they have laughed off the gossip.

The media has also recently rumored Kenneth with Jacqueline Wong (黃心穎), in which he also denied. Kenneth expressed helplessly, “I don’t even know who I’m romantically linked to anymore! I was prepared to answer questions about Natalie, but now it’s Jacqueline! Who knows whom it’ll be next time? I’ll treat it as promotion!” Speaking of the upcoming awards, he hopes ex-girlfriend Nancy Wu (胡定欣) will win TV Queen for her performance in Ghost of Relativity <鬼同你OT>.

Tony commented, “I stood beside Kenneth because there was room. Don’t think too much! We didn’t have a designated spot. Since he is so popular nowadays, of course I would want to hitch off some of his fame!” As to why he is not standing next to Jacqueline, Tony joked, “I like Kenneth more!” He added that he has confidence in Eye in the Sky <天眼> costar Ruco Chan (陳展鵬) in winning this year’s TV King.