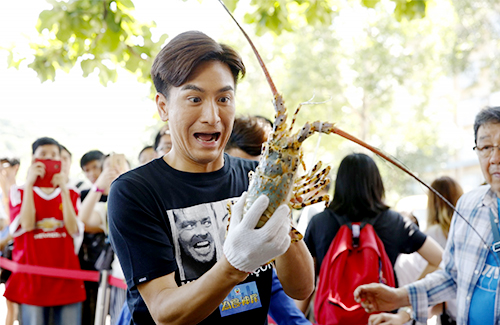 It has been revealed that Kenneth Ma (馬國明) has purchased a new luxury apartment in Hong Kong Island’s Tai Koo Shing for $19.6 million HKD. The new home is over 1,000 sq ft., and includes a large balcony.

Kenneth, who lives with his mother and older sister, said his reason behind the large purchase was so his family could live more comfortably. He will be renting out his old apartment.

The TVB actor shared, “I already purchased [the new apartment] at a reduced price. It was over $23 million HKD ten months ago.”

Asking if Kenneth’s next step would be to starting his own family, he smiled and said, “Haven’t thought that far yet. I’ll leave it to fate! I’ve been saving this money for many, many years. It was hard! I’ll continue to work hard to earn more!”

Wong Cho-lam (王祖藍), who also recently purchased a new property, said he has to pay up to $320,000 HKD mortgage a month. Asking if his next step would be to have a baby with wife Leanne Li (李亞男), he laughed and said, “My mother won’t help us take care of it!”

Leanne’s close friend, Linda Chung (鍾嘉欣), is rumored to have already given birth. Leanne said she doesn’t have any inside news but will be waiting for Linda to drop the official announcement.

Leanne will be taking a trip to Vancouver soon to visit her. “I also want to see the baby!” (Do you know if it’s girl or a boy?) “Let her announce it!”