Not long ago, tabloids reported that former close friends Jacqueline Wong (黃心穎) and Roxanne Tong (湯洛雯) unfollowed each other on social media, causing rumors of discord. The news did not come as a surprise, as Jacqueline’s ex-boyfriend Kenneth Ma (馬國明) is now dating Roxanne. Highly intrigued by the recent events, reporters immediately asked Kenneth about the situation when he made a public appearance at the promotional event for Line Walker 3: Bull Fight <使徒行者 3> with Mandy Wong (黃智雯). 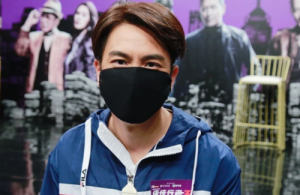 Facing the reporters at TVB Studios in Tseung Kwan O, Kenneth feigned ignorance and responded, “I haven’t paid attention; you’d have to ask them if they have been in contact.”

As for the rumor regarding TVB terminating their contract with Jacqueline, he said he hadn’t heard about it. The actor continued to decline to comment on Jacqueline-related matters when reporters asked if the contract termination would be better for Jacqueline to start anew. “You’d have to ask her… you’d have to ask her where she wants to develop her career in the future,” he replied.

Instead, Kenneth was more willing to divulge his other friends’ affairs, such as Edwin Siu (蕭正楠), who is quarantining after he came into close contact with a restaurant employee who was tested positive for COVID-19 while filming a show. Unaware of the confirmed case, Edwin had attended the TVB Anniversary Gala sans face mask, like the other artistes. Luckily, both Kenneth and Mandy have tested negative for COVID-19 the next day.

Kenneth shared, “I talked to Edwin, and I know that he didn’t have much contact with the infected person, so his chances of contracting it should be slim. But it’s better to isolate himself for the general public’s health.” 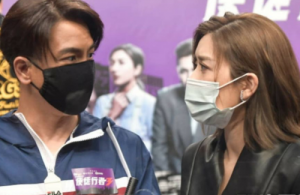 On a more positive note, Mandy and Kenneth both expressed their happiness for Benjamin Yuen‘s (袁偉豪) marriage. When asked if the event inspired them to get hitched to their respective partners, Kenneth passed the ball to Mandy, who has been in a stable relationship for eight years. She expressed, “Lately, I’ve been doing a lot of interviews, so people have been asking me when I’m getting married every day. It can’t happen tomorrow, as I need time to prepare. Everyone is more anxious than I am.”

She then diverted the question to Kenneth by saying, “Some people need more time while others can get married in a few years. Also, I’d be afraid to get married first if big brother Kenneth doesn’t get married, haha.”

Kenneth joked, “You’re screwed if you wait for me first! I’ll definitely announce it when the time comes, though.”