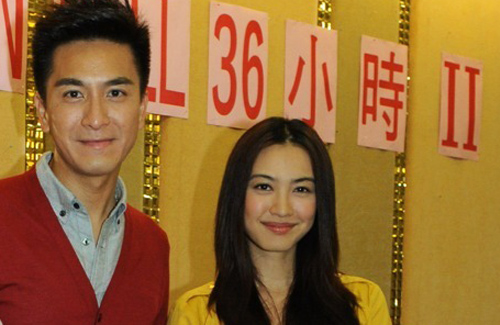 Since breaking up with Nancy Wu (胡定欣) in 2009, Kenneth Ma (馬國明) is known as one of TVB’s top diamond bachelors. However, recent tabloids suggest that Kenneth may be dating The Hippocratic Crush 2 <On Call36小時Ⅱ> costar, Tracy Chu (朱千雪). Reportedly, Tracy carpooled with Kenneth to and from all the events they shared together, and she has already introduced her mother to him.

Keeping an Eye on Kenneth

Since meeting on set The Hippocratic Crush 2 earlier this year, both Kenneth and Tracy allegedly developed a liking for each other. Although they did not share any scenes in the drama, Tracy constantly asked Kenneth for advice. She has an easygoing personality, and always took the initiative to make new friends. According to reports, Tracy was chatty with all her costars, except Lawrence Ng (吳啟華). Even though he acted as a great mentor towards her, the age gap was too large.

During meal breaks, Tracy always opted to sit beside Kenneth. An insider revealed, “Kenneth found her different from others, and is very comfortable around her. You know his ex-girlfriends such as Nancy Wu and Margie Tsang (曾華倩) both sort of have the princess syndrome.” Reportedly, Tracy tried her best to keep in contact with Kenneth after completing the drama. In August and September, while Kenneth filmed Cold Mountain, Hidden Dragon <寒山潛龍> with Selena Li (李詩韻), Tracy allegedly visited the film set whenever possible to keep an eye on him.

On December 15, the cast of The Hippocratic Crush 2 gathered in a mall to enjoy the finale together with the public. Tracy brought her mother there as well, reportedly wanting her to watch the climatic scenes where Kenneth’s Ma’s character gets saved. When the event ended at 10 p.m., Kenneth drove Tracy and her mother back to their apartment. Tracy even took out her Octopus card to pay for the parking fare. She sat casually in the passenger seat right next to Kenneth. After reaching their residence, Tracy waved a cheerful goodbye. Upon entering the apartment lobby, she quickly sent Kenneth a text to ensure her safety.

At an earlier TVB dinner event, Tracy also lingered around Kenneth. She was originally to be seated with other Miss Hong Kong pageants, but instead moved herself to Kenneth Ma’s table. An insider added that Tracy also followed Kenneth around for recreation. “Kenneth doesn’t do much for leisure besides playing soccer. Once, Tracy went to the soccer field to watch him play. Her mother met Kenneth many times already as well, and is very satisfied!”

Does Not Deny Dating Rumors

In a brief interview, Tracy did not directly respond to whether she is currently dating Kenneth. Instead, she explained carpooling with him because they both live on Hong Kong Island. When asked if Kenneth is pursuing her, Tracy replied, “That time we were together…we working together. Everyone is just throwing it around.” When it was pointed out that Kenneth meets all her requirements as a possible boyfriend for being nice and understanding towards her career, Tracy exclaimed, “Really? Maybe!”