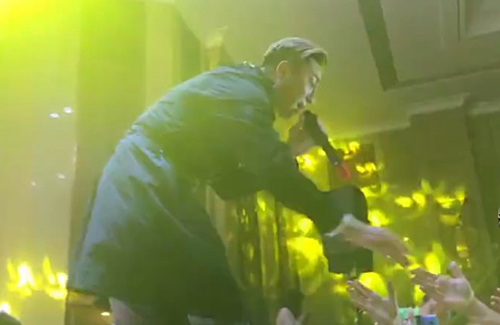 After Big White Duel <白色強人> ended its run, Kenneth Ma (馬國明) has been busy holding concerts in Mainland China. Despite others worrying that he may run into similar risky situations such as Simon Yam (任達華) experiencing a knife attack, Kenneth is at ease due to the strengthened security.

He expressed, “Security is tight, and fans aren’t allowed to go on stage. So I can only shake their hands with them as I sing on stage.” When asked if he is worried about personal safety, Kenneth noted that Simon’s incident is a different case. “I’m personally not too worried, and I’ll do the same for the rest of the upcoming concerts as well.”

For this event, former ATV artiste Wong Oi Yiu (黃璦瑤) and 1998 Mr Hong Kong Jerry Leung (梁皓楷) participated as the co-hosts and shared their selfie snaps on social media. Oi Yiu commented, “Very cherished to have such a performance. I hope that there’ll be another one soon.”