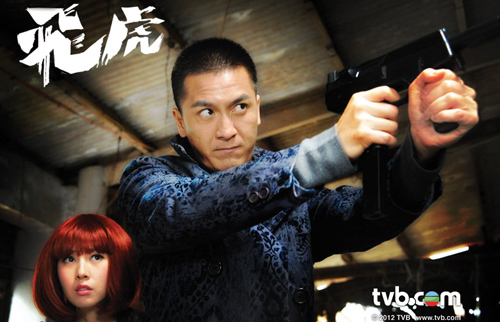 Viewers complained that Kenneth’s method of murdering Kelvin Leung (梁証嘉) and Otto Chan (陳志健) was too gruesome to watch. As Kenneth ruthlessly cut the throats of his two victims, blood drained from their necks. Although the scene was filmed in dim light, the image was jolting enough to spur 5 complaints to be filed at the Broadcasting Authority and TVB respectively.

It was refreshing that “diamond bachelor” Kenneth Ma took a 180 degree spin by playing a violent criminal in Tiger Cubs. Despite Kenneth’s ruthlessness, fans on Weibo complimented him, “He’s outrageously handsome, not terrifying!” Another fan wrote, “The drama’s ratings were strong because Kenneth Ma is in the drama! Without him, the series would not be as good!”

TVB Deputy Director of External Affairs, Tsang Sing Ming (曾醒明), indicated that Tiger Cubs’ reception was extremely successful. The drama generated lively discussions and boosted TVB’s weekend timeslot performance dramatically. Tiger Cubs even outperformed the ratings  of dramas airing during primetime slots from Monday to Friday. In July, the broadcast of Tiger Cubs will be extended to Saturday and Sunday.

Another drama featuring gratuitous violence, Master of Play <心戰>, may win the title of “drama with the most audience complaints” due to its serial killer subject matter. Although Master of Play was created by golden duo, producer Jonathan Chik and scriptwriter Zhou Xuming, older viewers did not gravitate towards the dark subject matter.

Jayne: Did Kenneth produce any fear inside you as you watched him cut the throats of his victims? What do you think of Tiger Cubs so far?