Kenneth Ma Will Be Starring in “The Exorcist’s Meter 2” 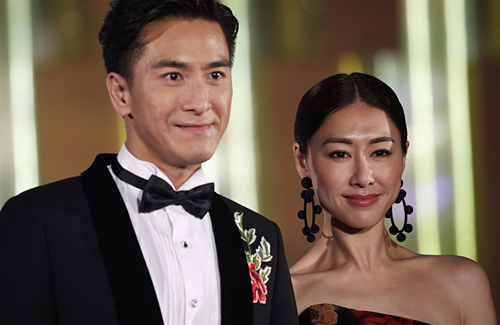 In 2019, fans can expect to see Kenneth Ma (馬國明) star in The Exorcist’s Meter 2 <降魔的2.0>, Big White Duel <白色強人>, and Agent C9 <C9特工>. The sales clips for these dramas were shown at the recent sales presentation TVB held for its advertisers.

In 2000, Kenneth joined TVB’s 14th Artiste Training Class and then he signed as an artiste for the company. Though Kenneth has been with TVB for 18 years in which he accumulated many lead roles, he did not gain the highest accolades such as TVB’s Best Actor award. However, the success of last year’s The Exorcist’s Meter <降魔的> led to Kenneth’s higher popularity, so fans will be excited to know that he will be starring in the sequel.

Kenneth confirmed that he will be in three new dramas next year. This is definitely exciting for him because he has never had three of his dramas released in one year. He excitedly said, “Besides Deep in the Realm of Conscience <深宮計>, I didn’t really have any other drama released this year. To be honest, Big White Duel and Agent C9 have already been filmed, but just not released yet so that’s why I will be getting a little more screen time next year.”

Like every drama, a sequel for The Exorcist’s Meter definitely comes with higher expectations. Kenneth shared, “It will mostly be the same cast, but with a few new faces to join the team. I think that most importantly, they have to keep the same production crew including the director and producer because they are the ones who made the drama so successful. When we were filming the first drama, they were already considering a sequel. They will not force a plot for a sequel’s sake, which I think is most important.”

Though Kenneth has received the script for The Exorcist’s Meter, he does not know the plot yet because he is focused on Flying Tiger 2 <飛虎>. But he has faith in the director and producer for making this sequel amazing. Could 2019 be Kenneth’s year for TVB’s Best Actor?