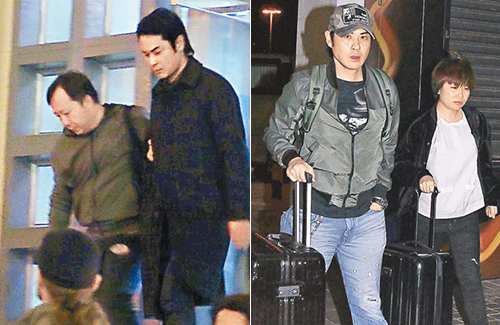 A few days ago, the Made in Kowloon <九龍不敗> film crew—including director Fruit Chan (陳果) and actor Kevin Cheng (鄭嘉穎)—were taken to the Public Security Police Force department in Macau after they were seen shooting a part of the movie in front of a restricted building in the city. They were detained by the police for 8 hours.

At the police station, Kevin’s phone had to be confiscated, but he did manage to notify his close family and friends beforehand. Kevin and the Made in Kowloon film crew were finally released at 11 p.m. They were confronted by reporters, but did not respond to their questions. When they were about to board their ferry back to Hong Kong, Kevin smiled and said he was fine. The film crew made it back to Hong Kong by 3 a.m.

According to reports, director Fruit Chan had to sign an apology statement to the Macau Security Force and other departments about not following the proper license procedures. Fruit Chan stated that he now understands what has to be done, and apologized again for the inconveniences he had caused for the Macau police. He stressed that he will follow all procedures when he films in Macau again.

Upon their return to Hong Kong, Fruit Chan and Kevin released a video recording of them explaining what had happened with the Macau police. Fruit apologized to Kevin for getting him involved, while Kevin said he was well, even praising the police department for having delicious food.

Timeline of the incident

January 12, around 3:00 p.m.
Kevin Cheng, Fruit Chat, Alan Wan, and other crew members of Made in Kowloon shot a scene in front of the Public Security Police Force Intelligence Agency. Kevin was told by director Fruit Chan to step into the building and walk back out. Because the film crew did not apply for a filming license there, Macau police brought them in for investigation.