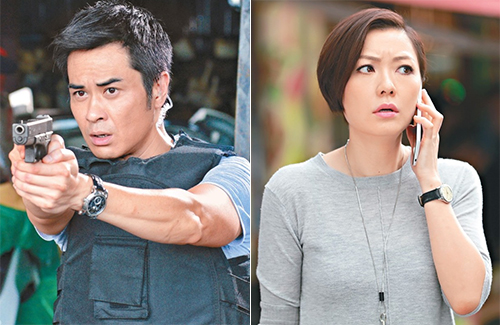 Both Kevin and Kristal will get to show a different side of their acting in Destination Nowhere. Kevin, known for his manly image and roles, will be playing a more submissive character, an unambitious cop who only works to put food on the table. He’s stingy, fearful, and dislikes spending money, but he bears the burden of being the breadwinner for his family, as he is the sole guardian of his niece, portrayed Winki Lai (賴慰玲).

Kristal, on the other hand, plays an aggressive and ambitious career woman who develops an antisocial personality after the murder of her daughter. She becomes cutthroat, ruthless, and manipulative. Kristal, who rarely gets the opportunity to play villains, does not consider her role to be evil. She explained, “Fate and circumstance are what pushed her into making wrong decisions. After making that first mistake, she continues to make more as she tries to cover up what she did.”

Though villains are hard to do, Kristal found the process fun and enjoyable. She said, “I’ve been acting since I was a teen. It’s been over twenty years now, yet I’ve never come across a character like this. It’s fun. It’s a breakthrough, and there are many very well-written scenes for my character. I once asked myself if I was capable of doing it. I went to my limits for this role. I was difficult. I had some fears.”

Destination Nowhere is Kristal’s first collaboration with Kevin. She said, “Kevin is definitely a ‘little man’ throughout the show. I’ve never seen him play such gentle roles before. He’s actually very cute and funny, and we’ve found our spark on camera. I’m very happy that I got a chance to work with him. Hopefully we’ll get more opinions and thoughts from our viewers after the show gets released!”