Kevin Cheng Does Some Fanservice in “Blue Veins” 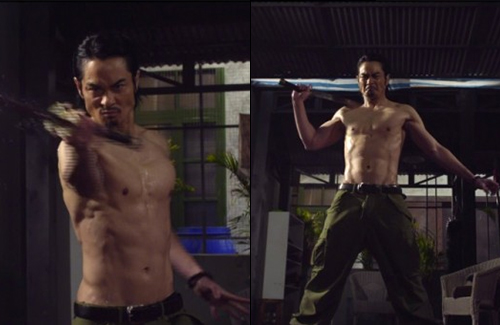 It was a slow start, but the TVB television drama Blue Veins <殭> is rounding up more and more viewers by the day.

The fantasy drama, which stars Kevin Cheng (鄭嘉穎) as a 500-year-old undead superhuman on a vampire hunt, is also the debut drama of pop singer Kay Tse (謝安琪). The series premiered on April 11 to mixed reviews, but did gain attention for its stylized action sequences and use of CGI. It was also partially shot in the Netherlands.

Kevin, with his slicked-back hair and unshaven jaw, was said to resemble a younger version of martial arts actor Yuen Wah (元華). In the latest episode, Kevin indulged the fans with some fan service and Yuen Wah aesthetic—he stripped off his t-shirt and did some sword practice without a shirt.

Though Kevin’s body was no where near the superhero physique, his lean and athletic body type was enough for fans to fangirl about it online. Fans pointed out that Kevin’s slicked-back hair didn’t move at all while fighting, and jokingly asked which hair gel brand he used. In the meantime, other fans pointed out that Kevin’s body is well-proportioned, joking that his figure looks even better than their goddess, Kay Tse.

Blue Veins will enter its series finale this weekend.

20 comments to Kevin Cheng Does Some Fanservice in “Blue Veins”