Starring Kenneth Ma (馬國明), Kevin Cheung (鄭嘉穎), Linda Chung (鍾嘉欣) and Catherine Chau (周家怡) in lead roles, Kids’ Lives Matter <星空下的仁醫> is the first TVB anniversary drama of this year, slated for premier on October 18. Producer Ben Fong (方浤酌) shares the difficulties of filming during the pandemic, and what viewers can expect from the pediatrics-themed drama! 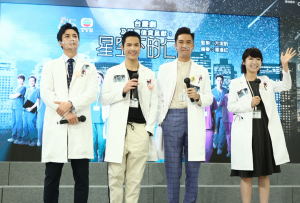 Besides having the two actresses join its cast, Ben felt that the drama’s thematic focus on pediatrics, its realistic portrayal of surgery procedures as well as the inclusion of anesthesiology will be its main highlights.

Kenneth, Kevin and Linda were old buddies back at medical school, with Kenneth’s calculating character being at odds with Kevin’s clear-cut personality. During a minimally invasive surgery once, the patient started hemorrhaging after Kevin left the operating theater,  and eventually succumbed. Kevin had suspicions that the medical report deliberately omitted several details, but Kenneth’s insistence that he stop probing into the case led the two friends to fall out. Twenty years on, the trio meet again in the pediatrics ward, and despite the previous friction, grow professionally and become closer through daily experiences.

Asked how he had secured Linda’s involvement, Ben shared that the actress quickly agreed as she was touched by the storyplot, and was drawn to the role. Both parents themselves, Linda and Kevin, who will play a bickering pair, were exceptionally patient when filming with young actors!

As for the Catherine-Kenneth romantic arch – likely a refreshing one for viewers – Ben shared that the two’s romantic feelings would be on the subtler side, as the drama will focus “more on compassion and warmth”. Knowing Catherine personally, Ben added that the actress’s ‘cold outside, warm inside’ personality mirrored that of her character; Him Law (羅子溢), who lives under the shadow of his mother (played by Mimi Kung 龔慈恩), a famous doctor, learns to overcome his psychological pressures after guidance from his mentor Kenneth.

Rising actress Regina Ho’s (何依婷) will play a budding doctor inspired to join the medical profession after being saved by a famous doctor during childhood, but later suffers a rare illness due to overwork.

The biggest challenges of filming was finding the right cast for young children and securing the operating theater, a pivotal part of the show. Ben even got his relatives’ kids to join professional child actors for shortlisting before twenty young actors were chosen to join in. As filming coincided with the second COVID-19 wave in Hong Kong, authorities did not allow the station to film at actual hospitals. The crew had to build their own surgical theater and office sets for filming, and he was more than pleased with how realistic everything turned out.

Thanking the medical professionals who offered their assistance, he said, “We were more daring [this time] and presented the operation scenes, I really thank the team of medical professionals for assisting with filming, every time we shot the OT scenes, there were doctors and nurses who came to supervise the process, it could not have been possible [without them].”