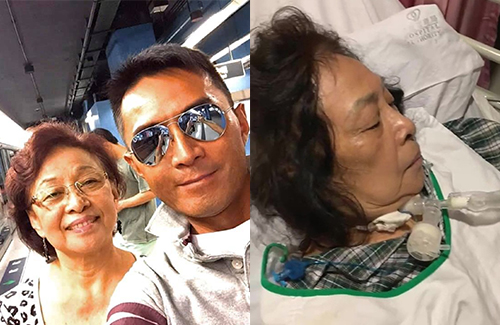 Lam Lei (林利) was very upset with how his mother was treated at the Queen Elizabeth Hospital in Yau Ma Tei.

The actor’s mother was admitted to the hospital for a lump lodged in her throat, which led to breathing difficulties. On the early morning of November 15, Lam Lei visited his mother, and found that she was restrained in bed, her wrists dripping with blood from the IV catheter site. Lam Lei immediately pulled out his phone to record a video and shared it on his Instagram.

“I really cannot control my feelings,” he wrote on Instagram. “My mother is just like a child. Why tie her down like that? My heart really, really hurts. Can I just suffer this pain in her place? I never felt afraid of living, but now I’m really afraid. Please help me.”

According to sources, Lam Lei had forced himself in the hospital. The medical personnel told him to leave, but he demanded to stay until he was sure that his mother was released from her restraining vest. As a tube was inserted into the trachea Lam Lei’s mother to assist with breathing, she could not speak and had to use her hands to gesture to her son instead. Lam Lei reassured his mother to not be scared, and that he would bring her home. “We will find professionals to take care of you at home, don’t worry,” he said.

Visibly upset with how his mother was being treated, Lam Lei asked for the primary physician. After communicating with the physician, Lam Lei’s mother agreed to stay in the hospital to continue with her treatment. The physician also treated the new wounds on her wrist.

“She’s really struggling,” Lam Lei said. “She’s asking me for help. Why is it like this?” He held onto his mother’s hand as he asked the doctor, “Why wasn’t this treated? Or were you guys just too busy and couldn’t handle it?”

Another medical personnel suggested that it was possible that Lam Lei’s mother was moving around in bed, which led to bleeding from the tugging and dislodging of the IV. Although still visibly angry, Lam Lei tried to keep his voice down and apologized to the doctor. “This is my mother, so I am a little agitated.” Lam Lei left the hospital half an hour later.

In a later interview with the media, Lam Lei clarified that due to pandemic restrictions, he was unable to visit his mother since her hospitalization. When the nurses finally allowed him to meet her, he was taken aback when he saw his mother’s physical state. “I saw my mother being restrained, hands bleeding. I immediately told them to loosen the restraints, which they did. But when I went to meet her again in the middle of the night, I saw her tied up again, and hands were still bleeding. I was heart broken. My mother literally wrote on a piece of paper telling me to dial 999.”

Pointing out that Lam Lei had forced himself in the hospital to visit his mother, he apologized and said he was in the wrong for not following protocol, however, he could not stand back after seeing his mother being possibly mistreated.

In response to this incident, Queen Elizabeth Hospital released a statement explaining their reasons behind the restrictions, and why they had to enforce strict visitation protocols to decrease the risk of spreading COVID-19. They added they will always be in close contact with patients’ families and will update them on the best possible way for visitations, including via video chat. To ensure safety of a patient, certain restriction protocols had to be enforced. In the case of Lam Lei’s mother, she was at risk for pulling out her tracheal tube and IV medications.

Lam Lei later apologized on Instagram for being too impulsive.

2 comments to Lam Lei’s Mother Neglected At the Hospital?