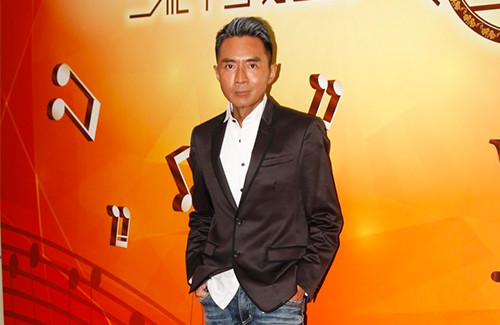 Veteran singer and actor Lam Lei (林利), who announced earlier this year that he was diagnosed with stage 2 colorectal cancer, is back in the game! A few days ago, the former Little Tigers Band (小虎隊) member showed up at a filming for an upcoming episode of the TVB music variety show Cantopop At 50 <流行經典50年>, announcing that he has officially won over his battle with cancer.

“It’s my first day back at work,” said the 51-year-old. “I’ve rested for three months. My doctor told me that I don’t need to go through chemotherapy anymore. It was a natural recovery. Fortunately, I maintain a regular exercise routine, so recovery’s been fast.”

Lam Lei underwent colorectal surgery to remove the tumor from his colon. “I can still hold a breath or more. I just sang for the first time in a long time!”

The E.U. <學警狙擊> actor said it is important to maintain a positive mindset while battling cancer. “Believe in natural recovery. I’d wake up every morning at five, hike, and soak in the sun. I’d walk until 7, and eat breakfast. I’d do some more walking and jogging around 8 to 9.”

Lam Lei will soon begin work for the TVB web drama The Defected <鐵探>, which stars Benjamin Yuen (袁偉豪), Kara Hui (衛英紅), Philip Keung (姜皓文), and Ben Wong (黃智賢). Asking if he has requested extra time to rest in between filming schedules, Lam Lei said, “Not really. When you’re doing a drama, you’d expect to film all day and night. Even if it’s a night schedule, that’s not a problem for me.” Has Lam Lei considered only filming a certain amount of hours a day? “Not really. It’s hard to accommodate the rest of the cast and crew with that request.  I’m very close to the producer, so he knows what I need. I do have a lot of action scenes in the film, but most of them will be done by a stunt double.”

1 comment to Lam Lei Wins Battle Against Cancer: “I’m Back!”