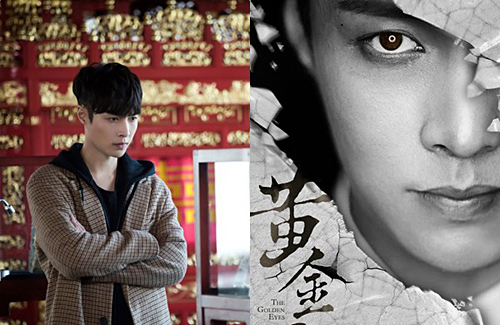 The EXO member plays a man with super powers in “The Golden Eyes”.

Lay Zhang (張藝興), the Mainland Chinese member of Seoul-based boyband EXO, has been crossing in film, music, and television with great sucess. He has also taken part in producing idol-making shows. This year, he filmed urban adventure drama The Golden Eyes <黃金瞳>. Zhang’s unique voice and charismatic delivery of lines has already charmed many fangirls in the drama’s trailer. The Golden Eyes will air on January 16, 2019.

Adapted from a novel of the same name by Chinese author Dayan (打眼), Lay plays an ordinary pawnshop employee whose life takes a dramatic turn after an accident left him with mutated eyes. In the trailer, he said, “My eyes have acquired a superpower, the ability to recognize treasures of all sorts. Once commonplace, (my) golden eyes have brought me fame overnight, along with access to immense wealth, power and influence.”

Because of this power, he is overcome by deep, dark desires such as greed, getting himself involved in gemstone auctioning, adventures in the wild and a risky journey to St. Petersburg. He develops a life-or-death friendship with close comrades Yuexin Wang’s (王櫟鑫) character Huang Puyun and Peng Fei, and has romantic entanglements with Cici Wang’s (王紫璇) female cop character Fei Fei and Chen Jiawen’s (陳泇文) character Qin Xuan Bing, a Hong Kong jewelry designer. Lay’s character eventually overcomes temptations, defeating darker forces at work and is rewarded with love.

Despite his star status, 27 year-old Lay Zhang has been known to have no airs, and shows his friendly, thoughtful side to the crew. Once he asked the director if he could install a warmer unit on the filming set to keep everyone warm. He is also known to give out red packets during the festive Chinese New Year and has even treated filming crew to fried chicken, fries, and coffee.