Currently streaming on myTV Super, Legal Mavericks 2 <踩過界 II> will air on TVB on November 16. In continuation of the previous installment, Vincent Wong (王浩信), Sisley Choi (蔡思貝), and Owen Cheung (張振朗) will continue to fight for justice on behalf of vulnerable populations in society. Legal Mavericks 2 will feature even more thought-provoking cases to make viewers reflect deeply upon their surroundings and societal issues.

Other than the strong cast, Producer Lam Chi Wah (林志華) promises that the script will move viewers, citing three cases that are a must-watch, “Unlike last time, the sequel will feature cases that are more realistic. We referenced actual cases, so they would resonate with the audience. We want each case to evoke deep emotions and make viewers reflect upon their own lives. Most are criminal cases and will focus on the concept of equality.”

Veteran artistes, Bowie Wu (胡楓) and Suet Nay (雪妮), were specifically invited to act in the series. “They will have a very sad and moving love story which will happen within a murder case. It is short and Suet Nay does not even have a line, but I want everyone to experience it through a small action or an expression in their eyes.”

The producer also recommends viewers to watch out for the murder case involving a fast food chain immigrant, “This case features Jason Piao (白彪), who plays a homeless character taking shelter in a fast food restaurant. His character really demonstrates the struggles of disadvantaged members of 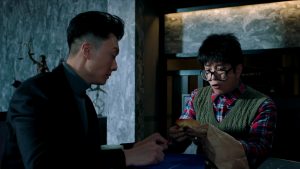 society.  We always talk about how having a full stomach is not enough–these people really require attention from society and care for their mental needs as well.”

The producer especially recommends the case featuring Alice Fung (馮素波) and Bob Cheung (張彥博). Though he did not disclose specific details, the producer is touched to tears every time he thinks of the unfortunate characters in the story.