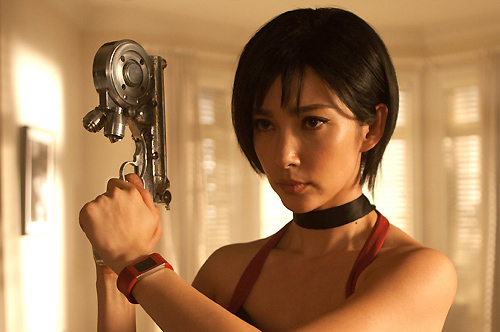 Mainland Chinese actress, Li Bingbing (李冰冰), is no newcomer when it comes to Hollywood films, but Resident Evil: Retribution may be Bingbing’s big breakthrough in the international market.

The film is the fifth installment in the Resident Evil film series, which is adapted from the Japanese survival-horror video game series of the same title.

Li Bingbing graced the red carpet with a long, black one-shoulder dress. Oriental Daily reported that Bingbing was one of the main focus of the night, winning over even Milla Jovovich, who sported a black dress with a deep plunging neckline. Dozens of reporters called out “Li!” or “Bingbing!” simultaneously to attract the 39-year-old’s attention, overwhelming Bingbing. The actress expressed afterwards that she felt unduly flattered with the amount of attention she received at the film premiere.

Anderson told the press that Bingbing is a crucial player in the film’s promotional tour. He revealed that the film received outstanding results in Taiwan’s box office in the first day, “Bingbing is our money-sucking rock!”

The Los Angeles premiere of Resident Evil: Retribution is Bingbing’s first red carpet event for the film after the actress refused to attend the film’s world premiere in Tokyo, Japan on September 5. She was reported saying that she will attend anywhere in the world to promote the film except Japan, expressing her political stance on the disputes between China and Japan for the claims of the Diaoyu (or Senkaku and Tiaoyutai) islands.