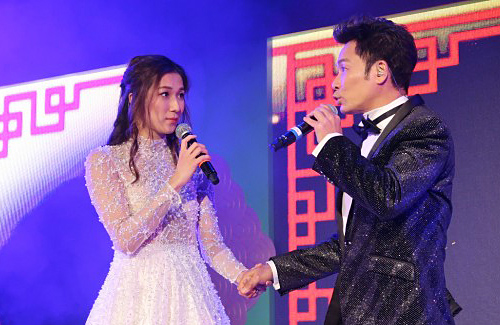 Since marrying chiropractor Jeremy Leung in 2015 and giving birth to the couple’s daughter, Kelly, Linda Chung (鍾嘉欣) has significantly reduced her workload. She is permanently residing in Canada and has indefinitely stepped away from her acting and singing career. However, she often makes regular trips to Hong Kong for endorsement jobs.

With the numerous celebrations and festivities surrounding the Lunar New Year holiday, many artistes receive offers for side jobs. Linda appeared in a Lunar New Year show in Toronto alongside Roger Kwok (郭晋安). In the spirit of welcoming the New Year, Linda appeared on stage dressed in a sharp colored red gown.

Despite a decently successful music career, Linda has also stepped away from singing for quite some time. For the event, fans were over the moon to hear Linda sing seven songs live on stage. Seeing her fans’ enthusiasm, Linda teased the audience and urged them all to give her some red envelopes for Kelly. Surprisingly, the audience were very obliging and handed Linda many red envelopes. Some fans even gave two; one for Linda and one for Kelly.

Later, Linda uploaded a photo of herself with the stash of red envelopes she received on the table. She said, “I’m very touched. I can’t believe everyone was so warmhearted. I’ve received so many red envelopes. It’s enough to put Kelly through elementary school!”