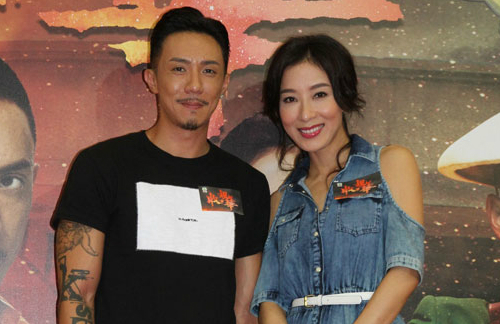 TVB’s Momentary Lapse of Reason <收規華> costars Louis Cheung (張繼聰) and Tavia Yeung (楊怡) attended a promotional function for their drama in Sham Shui Po. Since a part of the function was held outside on the streets, a huge crowd gathered around the cast members and generated much buzz. Louis exclaimed the series is a great watch, and that he has received texts of praise from friends.

When asked if he allows his son to watch the series, Louis expressed, “He just got back from a vacation and didn’t get to see much of it. I’ll let him watch, but I would explain to him that my character is a good person. Parent education is very important for children!” He added that he formed several genuine friendships with his costars after filming the series.

Speaking of the year-end TVB Anniversary Awards Ceremony, Louis remarked, “I have confidence in…sitting there! I always carry an easygoing attitude in terms of winning awards, but I truly hope that Tavia will win TV Queen. I’ll definitely be voting for her!” Tavia, who was standing next to him, joking expressed, “Can you take a photo and show me after you vote?” Louis then quickly exclaimed, “That’s just saying you don’t believe me!” The reporters laughed at the costars’ lighthearted bickering.

Tavia was asked if her confidence in winning TV Queen increased after Myolie Wu (胡杏兒) left the station. She replied, “Those who know me know that I’m not about winning awards. I actually think Nancy Wu’s (胡定欣) performance in Ghost of Relativity <鬼同你OT> is great! It’s a big breakthrough, and I support her!”