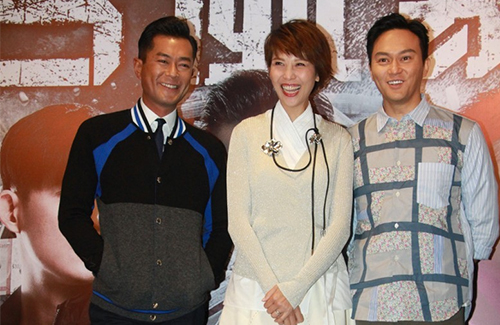 Pegasus Entertainment’s S Storm <S風暴> debuted to financial success when it hit cinemas in Hong Kong, Macau, and Mainland China on September 19. Since its debut, the crime film has grossed a total of $250 million HKD in those three regions, becoming one of the highest-grossing films of September.

“Congratulations to our boss Raymond Wong Pak-ming (黃百鳴),” said Chilam, on the box office success of S Storm. Asking if he would be getting a bonus in his earnings, Chilam said, “We didn’t talk about that.” (Will you request for a bonus in your next film?) “We do get bonuses for some films, but not for this one.” (Would you like to add this detail in your next contract?) “Of course! The more the better!” Asking if he would be interested in filming another movie in the Storm franchise, Chilam said, “I died in this film, but the death was open-ended. Let’s see how the director and writers play out my character. I’d be interested, but it really depends on the story.” (What about a prequel?) “This is already considered a prequel.” (A pre-prequel?) “I don’t mind playing a vegetative patient in the sequel. Even better if I get bonuses for the role, but this job is too good to be true!”

However, even if a third movie is in store, Chilam doubts he’d have time to shoot it. “My schedule is full until the second half of next year. I’ll also be doing a new reality show with my wife [Anita Yuen 袁詠儀].”

Louis Koo said, “I heard Raymond Wong really wants a third film. I think he’ll invite the original cast back.” (But Chilam died in the movie.) “It was an open ending.” (Maybe he’ll come back to life?) “It’s a also possible that it’s just going to be a new story.” (Will you consider investing in the third film?) “I’ll just reprise my role in the last two films.”

Ada Choi, who stars in S Storm as Louis’s ICAC coworker, said S Storm is the highest-grossing film of her career, and is honored to be able to take part in the project. Ada shared that her next project will be TVB’s Inbound Troubles 3 <老表3>, produced by Wong Cho-lam (王祖藍). It will be Ada’s first TVB drama since 2013’s Beauty at War <金枝慾孽貳>.

“It’s confirmed,” said Ada. “Filming will start in November, and will probably last until January. I can’t reveal too much about my character, but I will be working with Roger Kwok (郭晉安).” Ada’s role was originally meant for Joey Meng (萬綺雯), who starred alongside Roger and Cho-lam in the last two Inbound installments. However, Joey turned down Inbound 3 due to other work commitments.

“I am replacing her,” said Ada. “But I don’t mind that. As long we’re all having a good time.”

Acknowledging TVB’s low salary package, Ada admitted that she won’t get a pay raise for Inbound 3. “I have an old contract, and I honor it. I will have no more debts to pay after this one.”