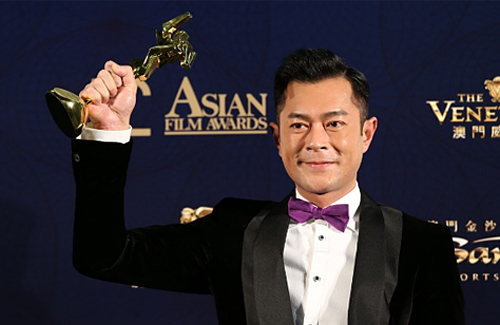 As one of the Hong Kong film industry’s highest-earning and most prolific actors, Louis Koo (古天樂) has filmed well over 100 movies since his debut in 1994. He has starred in many big budget and highly acclaimed films, ranging in a variety of genres such as comedy, action, and thriller. Though often named alongside film kings Sean Lau (劉青雲), Nick Cheung (張家輝), and Andy Lau (劉德華), awards seem to always slip past the versatile actor.

However, the tide is finally changing for the 47-year-old actor, who was named Best Actor at the 12th Asian Film Awards for his role in the Hong Kong action film, Paradox <殺破狼・貪狼>. Good things come in pairs, and Louis also pocketed the Hong Kong Film Directors’ Guild’s Best Actor award recently. Louis has received acclaim for his role in the action movie as a vengeful cop seeking revenge for his missing daughter. Directed by Wilson Yip (葉偉信) and choreographed by Sammo Hung (洪金寶), Paradox is an action-packed film that has already won several awards. With this role, Louis is also nominated for Best Actor at the 37th Hong Kong Film Awards, which will take place on April 15.

Louis continues to contribute much of his time, energy, and resources into the Hong Kong film industry. In addition to his work on screen, Louis created his own film production company, One Cool Film Production, in 2013. The company has produced several well-received movies, including Keeper of Darkness <陀地驅魔人>, Little Big Master <五個小孩的校長>, and Sisterhood <骨妹>. His contributions to the Hong Kong film industry is undeniable. Many fans feel that he is well-deserving of this year’s Best Actor award. Perhaps this year is his lucky year, with good things coming in three’s!