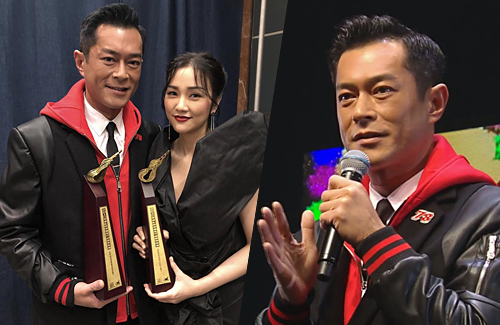 Returning to the Hong Kong music industry last year, Louis Koo’s (古天樂) comeback achieved immediate success. He won Favorite Male Singer at the 2018 Ultimate Song Chart Awards. It wasn’t clear whether Louis would be able to attend the ceremony, and when he stepped on stage to get his award, the crowd had cheered loudly.

Well-aware that he is known more for being an actor than a singer, Louis said in his speech, “I really like singing, but I don’t know how to sing. This world is very odd; there are miracles. Even I could stand on stage and get an award. It really makes me speechless. But first, what I really have to say is, thank you to the people who voted for me. I am aware that my songs aren’t what everyone loves the most about me. As I became President of the Hong Kong Performing Artistes Guild last year, I really want to help new singers. I spent most of my time with them and had meals with a lot of new and aspiring singers, because I really don’t know anything. Once I understood, I noticed that they never lost their fiery passion. I’m very happy, you see me, even I can walk on stage. As a new artiste, you shouldn’t be afraid to be taken advantage of. Don’t give up, our Hong Kong music scene and Cantonese songs will depend on you.”

The 48-year-old actor’s comeback song is a duet with Kay Tse (謝安琪) called “One Man, One Woman, and a Bathroom” <(一個男人) 一個女人 和浴室>, which is a remix of her single “One Woman and a Bathroom”.

Despite being more comfortable in acting than singing, Louis’ music comeback goals weren’t just a challenge for himself but to also demonstrate to aspiring singers that they shouldn’t give up on their dreams. With the positive reception on his singing, it is likely that Louis will continue pursuits in the music industry.

TAGS: Kay Tse, Louis Koo, One Man One Woman and a Bathroom