Though Cecilia Cheung (张柏芝) and Nicholas Tse (谢霆锋) have been divorced for eight years, they still remain in contact for the sake of their two sons, 12-year-old Lucas (谢振轩) and 9-year-old Quintus (谢振南). In the eyes of many, both parents are doing their part for their children. Speaking with the press recently, Lucas revealed that Nicholas is actually an absent father in their lives.

With Quintus being too young and Lucas on the quieter side, the Tse brothers do not often speak to the press. Breaking his usual silence, Lucas shared that he and Quintus rarely see their father because of his busy work schedule. Lucas said, “When I’m sick or my brother has fever, only Mom is with us. I don’t regret that Mom and Dad separated, because he’s not good enough for Mom.” 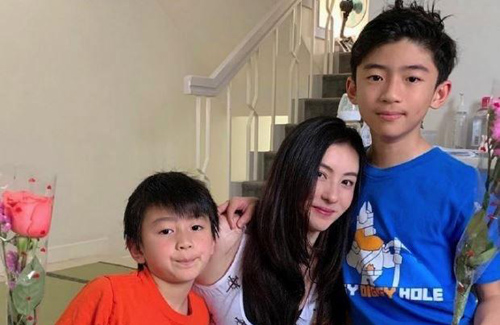 Though Lucas is still very young, Cecilia has mentioned in the past how mature he is for his age and often takes care of his brothers and herself. When the couple was still together, photos of the family of four were seen quite often. After the divorce, only Cecilia was seen driving her children to and from school, and taking them on vacation. In the past many considered Lucas to be Nicholas’ mini-me, but the time spent apart has drifted the father and son.

Nicholas Tse Issues Statement Over Relationship with His Children