Mandy Lieu Does Not Live in a Luxurious Mansion 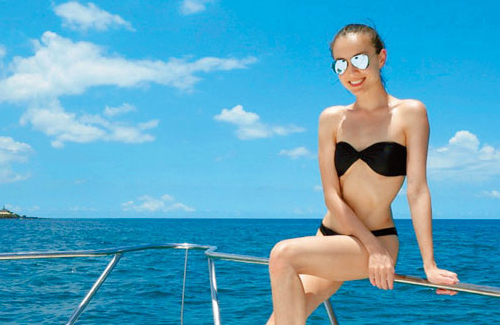 As casino tycoon Alvin Chau’s (周焯華) lover, Mandy Lieu (劉碧麗) has reportedly taken a hold of over $200 million HKD worth of property throughout the year. Giving birth to a daughter in London, England on May 20, Mandy was initially thought to be living in a luxurious mansion. However, reporters found out via Mandy’s check-in address that this is not the case.

According to tabloids, Mandy’s written address is in South Quay, a 30-minute drive away from London’s city centre. She lives in the Pan Peninsula, in a two-room flat approximately more than 800 square ft. in size. It is reportedly only worth $10 million HKD. This is far different from previous speculations that she is living in a 3,500 square ft. deluxe mansion worth $1.08 billion HKD in the costly Belgravia area.

However, although the Pan Peninsula cannot be compared to a mansion, it still offers wonderful facilities to its residents. Named the 19th tallest high-rise in London, it has a fitness room, indoor swimming pool, and a mini theatre. The atmosphere is quiet and the surrounding air is clean. Mandy reportedly resides in the east block of the Pan Peninsula, with a spectacular ocean-view.