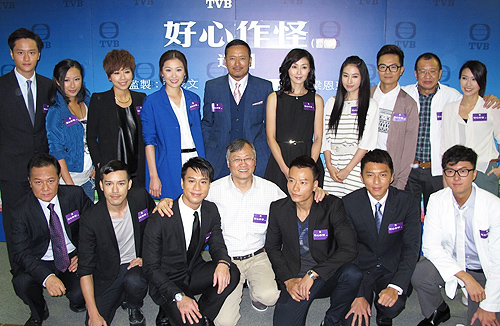 Attracted by her character and the drama’s script, Joey Meng reportedly turned down several acting opportunities in order to film A Good Heart Goes Haywire. She will portray the wife of Michael Miu’s character, the ruthless boss of a triad organization who undergoes a personality change after surviving a near-fatal accident. Bosco Wong’s character then seizes this chance to usurp Michael’s power.

JJ Jia, who allegedly broke up with Sammy Shum in July, did not feel awkward when being interviewed together with Sammy. She explained that she will not share many scenes with Sammy in the drama, and insisted that she and Sammy still get along as colleagues.

JJ Jia also denied reports indicating that she is dating martial arts star, Louis Fan (樊少皇), stating, “We are good friends, and we are still trying to get to know each other.” Asked if she will consider dating Sammy Sum again, JJ Jia immediately said, “Don’t say it that way.”