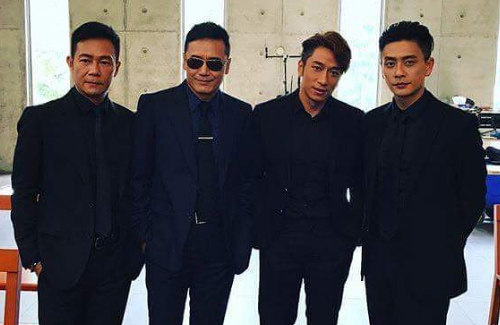 Despite often portraying similar law enforcement roles, Michael is not jaded by the repetition and instead finds room for growth with the opportunities. The 59-year-old actor said, “I always consider myself as a newcomer. As I grow older, I continue to learn and seek breakthroughs. Every filming project is a new learning experience and has its breakthrough potential.” Although he shared that there are several prospective projects where he was invited to serve as director, his true passion lies with filming.

Michael has collaborated many times with Bosco and Ron. With Bosco, the two worked together in Au Revoir Shanghai <上海傳奇>, Devil’s Disciples <強劍>, and A Change of Heart <好心作怪>. With Ron, the duo starred alongside one another in The Academy <學警雄心>, On the First Beat <學警出更>, E.U. <學警狙擊>, The Drive of Life <歲月風雲>, ICAC Investigators 2007 <廉政行動2007>, and L’escargot <缺宅男女>. As such, Michael has witnessed both Bosco and Ron’s growth over the years. In addition to watching them grow into mature men, Michael exclaimed that he can also seen their acting skills evolve over time.

Ending his TVB management contract after nearly 18 years, Bosco is working extra hard to prove himself and performs many action scenes in the web drama. Due to the action scenes and extensive filming schedule, he lost a lot of weight and is now down to 150 pounds, despite standing at approximately 5’11. He jokingly lamented, “If you want your next generation to do well, don’t be an actor! Viewers may have a good time watching, but during filming, accidents could happen at any time.”