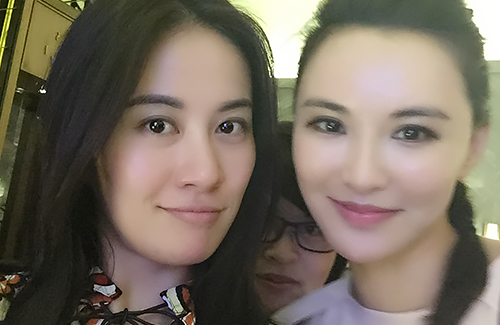 Michelle Ye (葉璇) and her friends experienced poor service while having some drinks at a restaurant in Shanghai. The 35-year-old actress took to her Weibo to complain about the bad service, writing, “M on the Bund’s service is seriously really bad! After finishing our dinner, they did not allow us to walk in for drinks at 9 pm. The attitude was even fierce, ‘If you guys go in now, each of you has to order a main dish that has to cost 600 RMB or more. Are you able to afford that?’”

Michelle then uploaded a photo of her with actress Monica Mok (莫小棋), and jokingly said, “Monica Mok, is it because you were dressing like a beggar?”

The owner of M on the Bund, Michelle Garnaut, has since apologized to Michelle and released an apology letter in both Chinese and English. In the statement, Garnaut wrote that she was “mortified and very, very sorry about [the] situation” and assured Michelle that the service staff member involved was “severely reprimanded.” Garnaut stressed that the restaurant has a policy that everyone, regardless of background and social status, is welcome to dine at M on the Bund.

“I would like to invite you and your friends to M on the Bund for dinner as my guests, as a gesture of very sincere and deep apology,” finished the statement.

At a Huayi Brothers and Elle China event in Shanghai, Michelle talked about her bad experience with M on the Bund to the press. She said she would most likely add that restaurant in her blacklist. “The attitude could have been better. The staff told us that we could only go in if we order main dishes that cost at least $600. It was embarrassing. In the end we left. I went to that restaurant many years ago and I had a good impression. I can’t believe this happened. The quality of service is so bad now.”

In the meantime, Michelle has been working on a new acting project in Mainland China. She revealed that she will be producing a new cop film and will also be starring in it. Asking if she will invite her regular onscreen partner Raymond Lam (林峯) to star in the film with her, she said, “Nope. The cast will be new.”