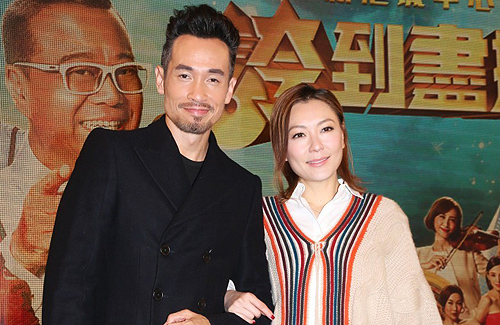 TVB anniversary drama My Ages Apart <誇世代> will air its final episode tonight. Kristal Tin (田蕊妮), Moses Chan (陳豪), Maggie Shiu (邵美琪), and Elena Kong (江美儀) attended a promotional event in anticipation of the finale. Bobby Au Yeung (歐陽震華) and Ali Lee (李佳芯) were unable to attend due to conflicting priorities. In addition, due to continuing issues between his manager and TVB, Louis Cheung (張繼聰) has also halted all work with TVB.

The cast have endured 50 episodes of filming in the past six months. When asked whether he will miss the cast and crew, Moses said, “We filmed for nearly half a year. Everyone had a great time filming and have become great friends! [Louis] wanted to come, but couldn’t. We will get together and have dinner soon though.”

Nominated for TV King this year for his role in the drama, Moses teased that he would take the opportunity to rally any votes he can. His wife, Aimee Chan (陳茵媺), has also voiced her support in Moses winning the award. Moses sweetly replied, “In my wife’s eye, how would I lose? But let’s see if I have the fortune [to win the award]. If they give me the award, then I’ll take it!”

At the end of the drama, Moses will become pregnant. Recalling the scene, Moses laughed and said, “My wife has given birth to three children, so I should give it a try too! A man giving birth… why not? This ending is the most unconventional that I have ever filmed. A lot of people are uncertain about it, but I really admire it. It’s very creative and steps out of the box.”

Kristal has also been nominated for the TV Queen award this year for her role in the series. The 2013 TV Queen said she is leaving awards up to fate, but remains confident in herself. When asked who she feels will win the TV King award, Kristal said, “Kenneth Ma (馬國明)! I really enjoyed The Exorcist’s Meter (降魔的).”