By jayne August 4, 2011
32 Comments
Myolie Wu (胡杏兒), Selena Li (李詩韻), Vincent Wong (王浩信), and Johnson Li (李思捷) appeared at the costume fitting for new TVB series, Exchanging Happiness <換樂無窮>. The story will revolve around the switching of souls between Myolie and Selena’s characters.
Recently, Selena was photographed at a nightclub hugging and kissing a man who resembled wealthy second generation, Eric Fok (霍啟山). At the costume fitting yesterday, Myolie intentionally teased Selena about her recent news. Myolie noted that when switching souls with Selena, she would prefer the swap occur when she was going out with a male companion.  Angela Tong (湯盈盈) joked and said that she wished to switch boyfriends with Myolie. Angela said, “Although my [boyfriend] is older, he knows kung fu and he possesses a longer…longer breath.” Selena Knew Male Friend for Half a Year
Asked about the man whom she was intimate with at the nightclub, Selena explained that they were only friends and did not kiss. He only held onto her hand to look for a taxi because she was wearing high heels at the time. Asked whether the man was “Mr. Right,” Selena replied, “We have known each other for half a year. I don’t know what will happen in the future. Currently, we are friends. He is not from a wealthy background. He is a good man, a smart man, and quite handsome!”
Asked whether she would develop further with the photographed man, Selena said, “Nothing is impossible at this moment. “ (Was he pursuing you?)  “I don’t know whether my thinking is different than his. However, I have not found the right person yet. When I found the right person, I will get married. So I will find a husband first before dating a man. I will make my selection very carefully.”
Myolie said she cherished Selena’s position, “A woman needs to date and meet some friends. My free time is spent sleeping, eating and filming.” Regarding Bosco Wong (黃宗澤), Myolie indicated that the pair has little time to see each other. Myolie hoped to take a vacation, however her work schedule will be full until the end of the year.
Exchanging Happiness is produced by Lam Chi Wah (林志華). Additional cast members include: Kiki Sheung (商天娥), Gordon Liu (劉家輝), Mimi Chu (朱咪咪), Cheung Chi Kong (蔣志光), Tina Shek (石天欣), Tang Chi Fung (鄧梓峰), Sin Ho Ying (冼灝英), and others. 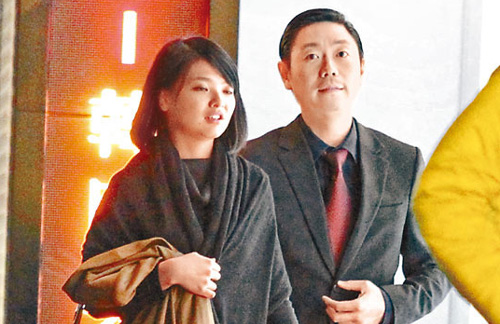