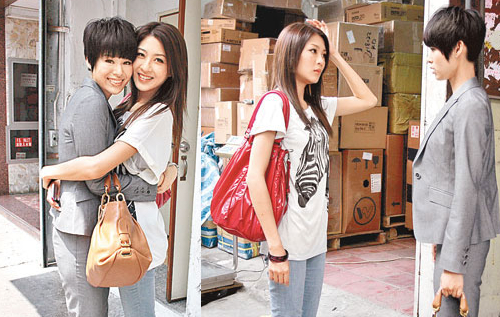 It turns out that Myolie and Sharon share a very deep personal friendship. Myolie said, “It has been seven years since Sharon and I filmed Dream of Colors <下一站彩虹> together! ”

In Fury Street Corner, Myolie will play a lawyer. Commenting on the crowd’s reaction while filming with Kevin Cheng Ka Wing earlier, Myolie said, “Many people surrounded us that day! I can’t believe so many people watched us film!”

Sharon will play a prostitute in Fury Street Corner. This will be a breakthrough role for Sharon, who will also have a romantic relationship with Sam Lee Chat Sum. “Although I have know Sam for many years, this is the first time we are working together. Since we already know each other well, we should have good [onscreen] compatibility.”

Jayne: Looking forward to seeing Myolie play a career minded professional role in Fury Street Corner! Hmm…will Myolie have better sparks with Kevin this time? I thought they were more friends than lovers in Burning Flame 3, like they were too polite with each other.