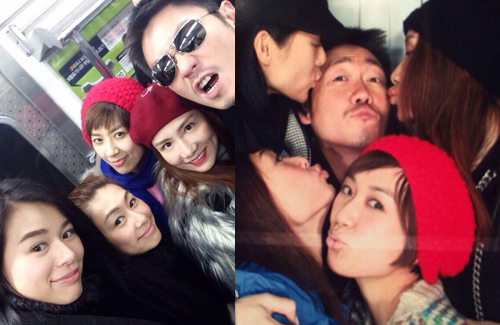 Myolie Wu (胡杏兒) mislead fans into believing that she had fallen for Johnson Lee (李思捷), who had accompanied her on vacation to South Korea this week. Some fans were anxious that Myolie would get hurt in dating Johnson, who is known for his flirtatious personality. As the public reeled in shock and growing concerns were voiced online, Myolie revealed her “dating announcement” was only a prank. Realizing fans were upset, she promised, “I won’t lie to everyone again!”

Myolie announced earlier that she will be taking a vacation to South Korea with close friends, Nancy Wu (胡定欣), Mandy Wong (黃智雯), and Paisley Wu (胡蓓蔚). When Johnson Lee showed up as the only male among the ladies, and Myolie was seen linking arms with him at the airport, it was suspected that the pair was dating. Myolie encouraged this belief by sharing a photo of herself hugging a mystery man and writing on her Sina Weibo account, “I’ve found [it]!” Although only the back of the man’s head was shown, his features resembled Johnson.

Disbelief flooded online social communities over Myolie’s dating choice, along with growing anxiety that Johnson’s colorful romantic past may lead to a poor match that would eventually leave Myolie heartbroken.

The prank lasted for approximately twelve hours, before Myolie finally admitted that she had tricked everyone. She realized that she had gone too far with the prank, explaining, “Actually ‘I’ve found’ a group of great friends who can share my happiness and grief. It’s great to have you guys! I also want to thank netizens’ concerns; I know you truly love me. Johnson said that I’m too serious and should goof off once in a while. I promise that I won’t lie to everyone again!”

Many expressed a sigh of relief that Myolie and Johnson were not a real couple. However, there was also some backlash over the lie. Johnson’s good friend, Joey Meng (萬綺雯) defended him, “It’s only a prank! He’s a big prankster and always does outrageous pranks!” Joey added, “The media always said that he has many girls, but they can all be friends with him. This proves that he has his reliable side. It didn’t hurt anyone; it’s only a prank!”