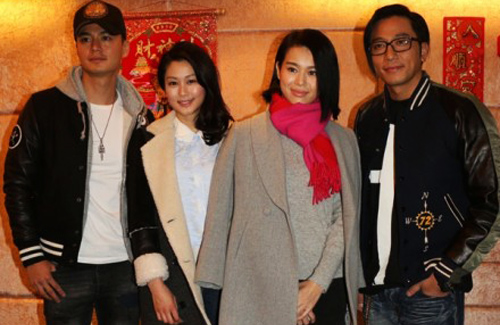 The cast and crew of TVB’s period drama The Vinegar Lady <醋娘子> gathered together for a dinner to celebrate the end of filming. Main leads Myolie Wu (胡杏兒), Ron Ng (吳卓羲), Eliza Sam (岑麗香), Him Law (羅仲謙), and Alice Chan (陳煒) expressed their happiness that production had managed to wrap up before the Lunar New Year holiday.

Speaking with a raspy voice, Myolie explained that she has gotten slightly ill due to the drama’s hectic filming schedule. She revealed that she did not get off of work until 5 a.m. two nights ago. “I’ve been coughing for a while. I will go do a full body check. I’m a bit worried. Hopefully after the check-up, I’ll be able to celebrate the New Year in peace.”

Admitting that her health has deteriorated in recent years, Myolie will limit herself to shooting only one Hong Kong drama per year. “I’ll be filming another [Hong Kong] drama this March, and I will leave the rest of my time for overseas schedules,” she said.

Last week, Myolie revealed that she has a new pursuer. The reporters drilled Myolie with questions again about her possible new relationship, and when asked if she plans on doing anything for Valentine’s Day, Myolie laughed and said, “I already got gifts, but they’re from sponsors!”

Has her pursuer mentioned about going on a date? Myolie smiled sweetly and said, “I’ll see what he will do! He hasn’t asked me out yet, but I do want to receive flowers [on Valentine’s Day]. I’ll be happy whether it’s from fans or family!”

Myolie said she does not know the possibility of a dating relationship, “I’ve just finished a busy filming schedule and now I want to rest. I haven’t had the time to really look into it, but I’ll keep my eyes wide open. Don’t worry!” She also added that she will be going on a vacation with her family to Japan this weekend.

Myolie’s costar Ron Ng also expressed his desire to rest after enduring The Vinegar Lady’s long filming schedule. He said, “For the New Year, I will visit my grandmothers. I haven’t paid them New Year visits in a long time. I won’t be shooting a new [TVB] drama until May or June.”

Ron is currently in talks to shoot a new mainland Chinese drama, but stated that nothing has been set in stone yet. He added, “If negotiations don’t work out, I’ll just use the free time to rest.”