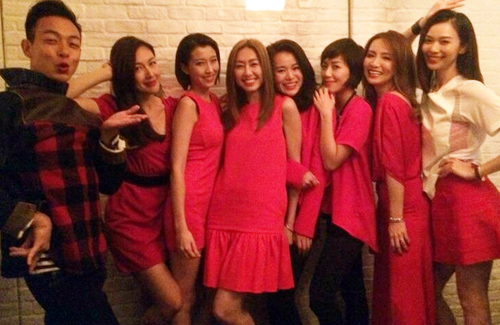 Close friends of Nancy Wu (胡定欣) gathered together at a small party to celebrate her 33rdbirthday, which fell on September 9. Having spent her past few birthdays at work, Nancy said she was grateful to have the opportunity to celebrate it with her friends this year.

The party ended at approximately 1 a.m.. Perhaps due to work commitments, Elaine Yiu and Vivien Yeo were seen leaving first around midnight. An hour later, the rest of the crew appeared at the front of the restaurant. They happily stood at the entrance and allowed the reporters to take photos.

Boyfriend Did Not Propose

The next day, Nancy showed up at a grand opening event for a Japanese fashion brand. Receiving compliments on her dyed, light brown hair, Nancy said she was told that she resembled a Japanese idol. Nancy said her boyfriend also thought the same. “He likes the Japanese style.”

Asked if her boyfriend had given her any gifts for her birthday, Nancy said he gave her flowers. He did not propose to her, and Nancy said even if he did she would not be ready yet. “I don’t know if he’s Mr. Right yet. Let me observe some more.”

It was revealed that Nancy’s former boyfriend, Kenneth Ma (馬國明), may be dating model Jackie X. Nancy laughed and said, “He’s old now. Besides work, he needs some love in his life too!”

Mentioning the rumor that Myolie Wu will be leaving TVB next year, Nancy said that Myolie still has some time left on her management contract. Asked if Myolie would leave when the duration of her contract ends, Nancy said, “Not sure yet.”