Nancy Wu to Play Ruco Chan’s Bodyguard in “The Alliance” 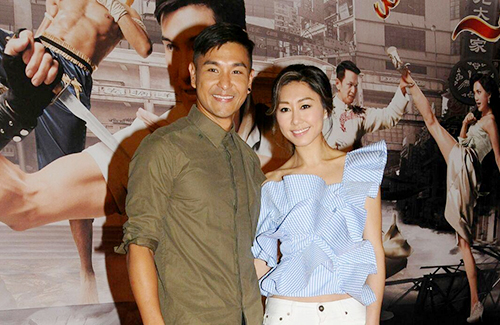 The team behind TVB’s hit drama A Fist Within Four Walls <城寨英雄> held a 14-table banquet on Tuesday to celebrate the success of its series finale, which aired on Sunday, August 28 to relatively high viewership numbers.

The manhua-inspired kung fu drama, produced by Jazz Boon (文偉鴻), averaged 32.9 points and peaked to 35.2 points in the last 10 minutes of Sunday’s finale, reaching 2.28 million live viewers. It is the highest peak and average for a TVB finale since 2013’s Triumph in the Skies 2 <衝上雲霄II>, which averaged averaged 38 and peaked to 41.

“I really want a film sequel,” said Nancy Wu (胡定欣), who starred in Four Walls as the retired assassin Tiu Lan. “Now that the producer (Jazz Boon) and Catherine Tsang (曾麗珍) are here, I’m going to ask them about it. I really, really want it to happen!”

Ruco Chan (陳展鵬), who starred in the series as Chor Au-kuen, was asked if he too would like to return as the walled city hero in a film sequel. He said simply, “It’s possible. We can.” Nancy nudged him and said, “Don’t say it like that! You don’t sound like you want it enough!”

Ruco and Nancy, who played a couple in Four Walls, will be teaming up again for Jazz Boon’s upcoming action thriller The Alliance <同盟>, which starts production this month. Nancy will be playing Ruco’s bodyguard, a skilled fighter in Krav Maga.

“Our producer considers us all as action actors, so he definitely won’t go easy on us,” said Nancy. “We have looked over the script for our new drama already. There’s going to be fighting in pretty much every episode like Four Walls.”

In regards to playing Ruco’s bodyguard, Nancy said, “My outfits will be short and tight-fitting. The weather is also getting colder, so I am a bit concerned.” (Worried about injuries?) “I’m okay. As long as we all look cool!”

Ruco, who will start training for his role next week, said, “There’s definitely going to be a lot of fighting for all of us. This is a modern drama, so it should be more flexible than period dramas like Four Walls. Therefore the possibility of it having a sequel or a film version should be bigger. Hopefully our new drama can be like Four Walls, and bring the audiences to a completely different world.”

The Alliance is described as a Mission: Impossible-esque action thriller, and is regarded by the media as a modern version of Four Walls. The drama will also star Film Queen Paw Hee-ching (鮑起静) in her first TVB drama, playing Ruco’s mother.

Describing Paw Hee-ching’s role, Ruco said, “She appears to be affable and kind in the outside, but she is actually someone who has many tricks up her sleeve.”