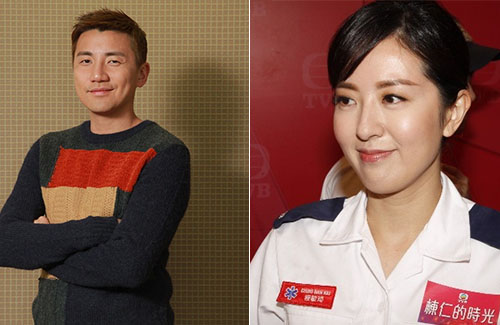 At the costume fitting press conference for TVB’s upcoming drama The Time of Tung Yan (棟仁的時光), leading lady Natalie Tong (唐詩詠) gave a rather cryptic response in regards to her breakup rumors with Tony Hung (洪永城), who she has been dating since late 2014.

Natalie, who plays an emergency medical technician in the new drama produced by Yip Chun-fai (葉鎮輝), Natalie first thanked the reporters’ concerns when they asked her about the breakup rumor. Natalie then declined to elaborate on her current relationship with Tony, but did say that they have communicated and have reached a consensus.

“[Tony’s] answer was that he’ll talk about it when the time is right,” said Natalie. “I hope that we will be given the privacy and space that we need during this time.”

Asking if their response to the breakup rumor would “optimistic”, Natalie replied by saying that life in general is optimistic, and that all hardships would eventually pay off. Natalie declined to talk about the last time that she has seen Tony. “Let’s not talk about that. I don’t want to leave room for guessing.”

Reporters pointed out that Vincent Wong (王浩信), Natalie’s costar in My Unfair Lady <不懂撒嬌的女人>, had joked about her getting married. Natalie said, “What a nosy person. I’ll take care of him!”