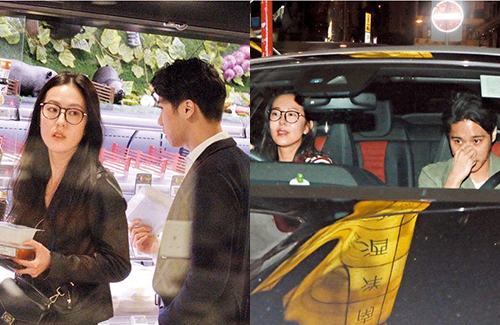 To live up to the title of being “Best Girlfriend”, certain sacrifices have to be made, and for Natalie Tong (唐詩詠), it’s to have her private life being constantly on watch.

After splitting with fellow TVB actor Tony Hung (洪永城), the HK paparazzi went back in hiding to catch Natalie’s next move. They found that the 38-year-old has been frequently seeing non-celebrity Samuel Chan (陳思銘), who is six years younger and is employed in the education industry. The pair never confirmed their romance, but recent sightings of the rumored couple shopping in a supermarket is leading to speculations that the two may already be living together.

Last year, Natalie was spotted going apartment hunting with close friend Priscilla Wong (黃翠如), At the time, it was thought that Priscilla was looking for a new home to start a family with husband Edwin Siu (蕭正楠), but Priscilla told reporters that it was actually Natalie who was doing the shopping.

A source close to Natalie told the Hong Kong paps: “She’s six years older than him, so of course Natalie feels rushed [to get married]. But she doesn’t want others to think that she’s desperate, and her relationship with [Samuel] isn’t completely steady yet, that’s why she still hasn’t settled on an apartment. She and Samuel have been dating for two years. If all else is well it’s likely that he will be the one she’s going to marry.”

Apparently, Natalie had specified that she would like her other half to have his own estate. Samuel then purchased an apartment in North Point, a location that Natalie had been considering. The two allegedly split their time between different homes: when Natalie isn’t committed to a drama, she would live with Samuel in Tuen Mun.

“They live a very normal life, but Natalie isn’t ready to go public yet,” said the source.