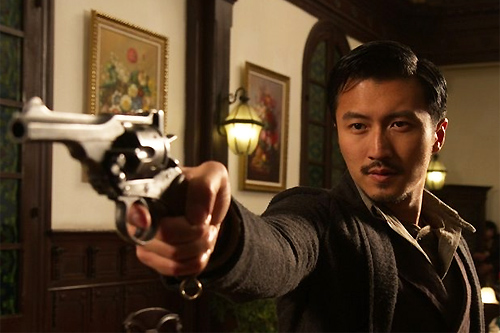 New period thriller film, The Bullet Vanishes <消失的子彈>, opens nationwide in mainland Chinese theaters on August 14th, 2012. The film is a first-time collaboration between award-winning actors, Sean Lau (劉青雲) and Nicholas Tse (謝霆鋒), who had to cut his vacation short in order for a chance to film with Sean.

Nicholas Tse revealed that in order to physically match up with Sean’s physical appearance, he had to gain weight for the role. Nicholas joked and said that the film should also be called “The Abs Vanishes” because of his weight gain. He exclaimed, “As everyone can see, big brother Sean Lau is very tall, strong, and has very healthy-looking skin. As investigators, we will have many scenes together, and I don’t want to stand next to him looking like a small, fair-faced little man.”

Nicholas also added, “When I was told that I was to work with Sean Lau, I immediately said yes. The director asked me if I wanted to look over the script first, but I told him that it wasn’t necessary because since Sean agreed to do this film, the script must be great. Sean Lau is such a great actor. I had to work with him!”

After the cast ended their Beijing promotions, Nicholas immediately booked an entire DMAX theater to watch the film by himself. He said, “Hong Kong’s not releasing this film until a month later, and I just could not wait another month. I had to watch this film immediately! This is my biggest film of the year! I did most of my career’s dangerous stunts in this film. I had to see it right away!”