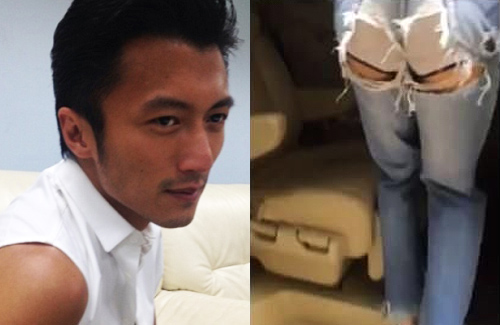 Currently working on his travelogue food program Chef Nic < 12道鋒味>, Nicholas Tse (謝霆鋒) opened up an official Facebook page to closely interact with his fans in Hong Kong. His cooking show, which focuses on regional foods around the world with celebrity guests, has decided to do a special segment in Hong Kong this month.

A few days ago, Nicholas uploaded two videos of himself walking around Hong Kong while wearing a pair of washed-out jeans that were ripped at the buttocks. The holes in his pants clearly revealed his underwear. He asked the fans if they could remember where they last saw these jeans, and many replied that they remember Nicholas had worn those jeans when he made a special guest appearance at Eason Chan’s (陳奕迅) Hong Kong Coliseum concert in 2010.

These jeans, however, have a much longer history. In 2002, Nicholas was seen wearing those jeans while he was filming a program for TVB. In 2003, Nicholas wore the same jeans while performing for the 1:99 Concert – fundraiser concert for victims of the SARS outbreak – at the Hong Kong Stadium. These pairs of jeans have managed to withstand the test of time and remained unscathed for more than 12 years.

On June 29, Nicholas will be holding a special eggette-making event with Eason Chan at Victoria Park.