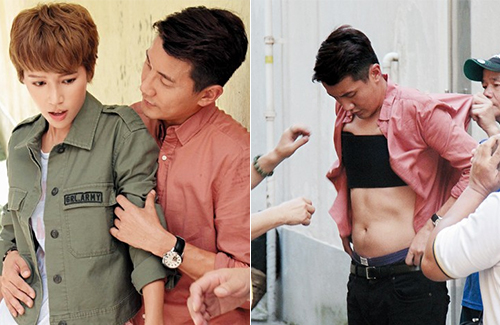 There was no awkwardness between Tony Hung (洪永城) and Kelly Fu (傅嘉莉) when they had to do a rather intimate scene for the new TVB drama, tentatively titled We Lied About Marriage <我瞞結婚了>. The scene was apparently pretty intense, because when reporters asked if Tony had notified his girlfriend, Natalie Tong (唐詩詠), about the scene, Tony slipped up and said, “Probably should’ve mentioned it.”

A while ago, paparazzi caught up with Tony and Kelly while they were filming an outdoor shoot for the new series in Kowloon City. The scene was about Tony saving Kelly from a speeding car. He wrapped his arms tightly around Kelly’s waist and pulled her to him. Their interaction was romantic and intimate.

In the show, Tony is married to Priscilla Wong (黃翠如). He has an extra-marital affair with Kelly.

In a brief interview with the reporters afterwards, Kelly said she didn’t feel embarrassed with Tony. “Not really… we have an action choreographer directing us on how to do the scene. It’s just acting.”

How did Kelly “feel”? Tony said, “Let’s not talk about that. It’ll be awkward for her. We’re just acting. I don’t feel embarrassed… everything’s okay.”

TAGS: Kelly Fu, Tony Hung, We Got in a Fake Marriage, We Lied About Marriage