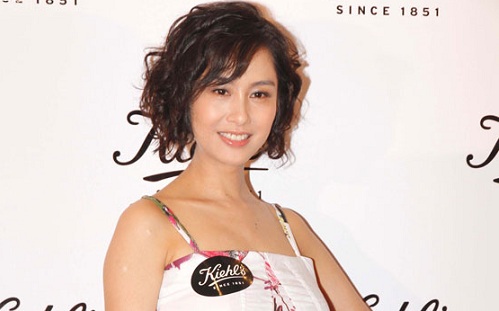 Rumored to be pregnant, Athena Chu (朱茵) wore a one-piece dress to attend the charity event of a skin care brand. Despite her waist appearing to be visibly thicker than before, Athena denied pregnant rumors. Asked what plans she had for Valentine’s Day, Athena said, “I do not have plans yet. Perhaps my boyfriend, Paul Wong (黃貫中), and I will cook dinner together. However, I did receive a bicycle as a gift.”

Asked whether Athena will give Paul a baby for this year’s Valentine’s Day, Athena said, “That’s crazy! It’s a human life. Right now, I am not pregnant.” (You cannot reveal the pregnancy yet due to its early stage?) “That’s crazy! No, that’s not it! Each winter, when I wear a puffy down coat, the journalists will craft such pregnancy stories!” Jayne: Is Athena pregnant or not? I guess we’ll know in a matter of months!