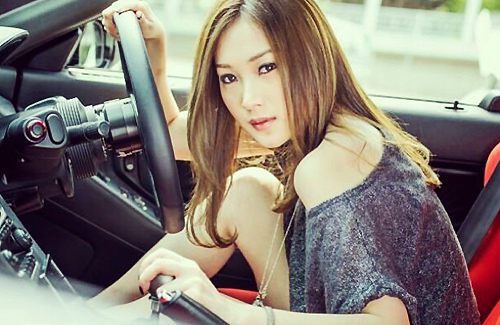 According to police investigations, around 2 AM on April 17, Sita was preparing to return home to her Harbourside residence after practicing her songs at her music teacher’s place. Possibly due to a combination of fatigue and the low visibility resulting from the thick fog late at night, Sita reportedly took a wrong turn and lost control of her car. She then hit the right-hand curb, bounced back, and struck the road’s central divider.

Sita was rushed to the emergency room at Kwong Wah Hospital. She was declared dead at 4:16 AM.

After learning of her death, Sita’s family burned offerings at the scene of the accident, which police had sealed off. The police also towed the singer’s damaged Lexus to the police force vehicle pound, in order to further investigate the car and clarify the cause of the accident.

In an interview, Dr. Fung Hin Tat (馮顯達), a Hong Kong emergency specialist, shared that car crashes can lead to death if the victims’ cervical vertebra becomes broken, as this will affect the nerves and the pulmonary system, and cause the brain to lose oxygen. Death can also occur when the victim’s ribs are fractured by the impact and thrust into the lungs or other internal organs, leading to internal bleeding or other heavy injuries.

Showing an early interest in music when she was only three years old, Sita started taking singing lessons with music teacher, Lam Tak Bo (林德寶). On the night of her death, Sita had gone to Lam’s place for three hours. Lam said, “Sita came to my place to record her song. She excitedly asked to take a photo with me. Afterward, we ate out with our colleagues. We chatted very happily together, but didn’t drink. At 12 midnight, we left separately.”

Sita’s good friend and Lan Kwai Fong 2 costar, Sammy Shum (沈震軒), cursed in shock after hearing about her death. Currently filming TVB drama, Always and Ever <情逆三世緣> in Foshan, Sammy hopes to return to Hong to attend Sita’s funeral. Sammy said, “We had a lot to talk about. Before leaving Hong Kong, I sang karaoke with her. I really want to see her one last time. I discussed this with [the TVB] production crew, but it cannot affect the filming schedule. We were going to film Patrick Kong’s (葉念琛) movie together. She had composed a song, in which we were going to sing it together.” Sammy also revealed that Sita’s wish had been to perform at the Hong Kong Coliseum.

Director Patrick Kong had originally intended to romantically pair Sammy and Sita in his new movie. Since the movie is in its early pre-production stage, the script can still be altered. Patrick said, “This would have been our first time collaborating together. When we met, I was moved by her smile and cheerful personality. I said to her privately, ‘I intend to showcase your bright side to the audience on the big screen.'”

Shiga Lin (連詩雅) burst into tears after she learned of Sita’s death. HotCha’s Crystal and Winkie grieved over the loss of their friend. Winkie cried and said that she still owed Sita a belated birthday celebration.

This article is written by Joanna and Jayne for JayneStars.com.