Priscilla Wong in Talks to Play Edwin Siu’s Daughter in “A General, a Scholar, and a Eunuch” Sequel 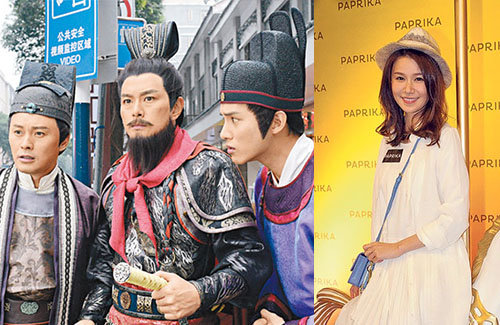 TVB is considering a sequel for their latest comedy drama A General, a Scholar, and a Eunuch <超時空男臣>, which has been seeing a solid increase in ratings since its debut on July 17.

The time-traveling comedy stars Edwin Siu (蕭正楠), Raymond Cho (曹永廉), and Matthew Ho (何廣沛) as the titular characters, three historical men from the Ming dynasty who time travels to present-day Hong Kong. The first week of episodes drew in an average rating of 24.5 points, followed by 25.8 points on the second week. On the third week of broadcast, A General scored a solid 26.8 points, drawing in an average of 1.73 million viewers.

With a solid audience base, TVB has expressed interest in producing a sequel for the show, which will continue the story of the general, the scholar, and the eunuch traveling back to their homeland and time. It is reported that TVB is trying to recruit Priscilla Wong (黃翠如) to play a cyborg of the future, who travels back in time with them.

Producer Marco Law (羅永賢) said, “It’s in serious consideration. The idea is that the three main characters will travel back to the Ming Dynasty from the present day, and will have to readjust back to their old life again. They may also bring Kristal Tin (田蕊妮) and Rebecca Zhu (朱晨麗) with them, and they’re going to have to learn about their new life. There’s a lot of room for the imagination!”

The producer added that he plans on creating a new character for the show, a cyborg from the year 2030, who follows the main characters back to Ming China. The producer plans to cast Priscilla Wong in the role.

“If all of this works out, they won’t be playing a couple,” said the producer when asked about Edwin and Priscilla’s relationship line for the sequel. “I may write her as Edwin’s daughter or Raymond’s daughter.”

Reporters approached Priscilla for confirmation, who said she hasn’t received any information from TVB about her new casting. “That is hilarious. Is this true? If it is then it’s going to be so much fun! I really enjoy the show, and I’ve heard that the cast had a blast filming it.”

Mentioning that her boyfriend, Edwin, doesn’t want her to have any intimate scenes with Raymond, Priscilla said, “Haha! I don’t know if that’s true but I would love to play a couple with Raymond!”

Asking Edwin if he has heard about the sequel, he said, “I’m excited! I have heard about it from Marco. Hopefully he’ll put me back on the show!”

4 comments to Priscilla Wong in Talks to Play Edwin Siu’s Daughter in “A General, a Scholar, and a Eunuch” Sequel