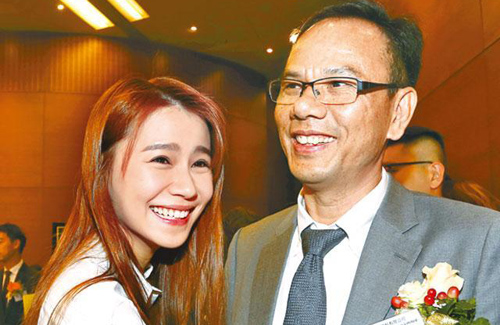 Maintaining a fairly private personal life, Priscilla Wong (黃翠如) rarely talks about her family. However, her father Wong Wing Wah (黃永華) became an overnight billionaire when his construction company was publicly listed last week. At the end of its initial listing day on the stock market, Wong Wing Wah’s net worth was estimated at $1.8 Billion HKD.

Priscilla revealed that her father went from selling fish illegally on the streets to becoming a mere construction worker before his success today. Despite becoming a billionaire’s daughter overnight, Priscilla firmly said her lifestyle will not change and she will continue to work equally as hard.

Returning to work with boyfriend Edwin Siu (蕭正楠), Priscilla was chased by the media behind the set of their new series Two Steps from Heaven <幕後玩家>. Surrounded by curious reporters, Priscilla had nowhere to hide and kept begging the paparazzi to stop bombarding her with questions.

Although Priscilla did not want to answer any specific questions from the reporters, it was evident that she was proud of her father’s achievements over the years.