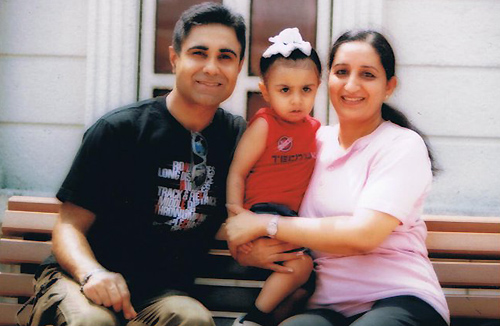 Earlier, the Hong Kong Immigration Department refused to issue an HKSAR passport to the wife of TVB Indian actor, Q BoBo (喬寶寶). Both were permanent Hong Kong residents. Unless there is a sudden turn of events, BoBo said he and his wife will move to Scotland permanently to take care of their son after his contract with TVB ends in April 2013.

The 43-year-old Indian actor exclaimed, “I don’t want to leave! I don’t know why her application was rejected. I’ve read the details. They said that as long as you have a permanent identity card and have stayed in Hong Kong for seven years, you will be applicable for a HKSAR passport. My Indians friends that were in a similar situation to my wife could apply for one! But my wife, who is willing to give up her Indian citizenship for a Chinese citizenship, could not!”

BoBo’s second son, 9-year-old Arvin, is diagnosed with spondylosis and ADHD. In order for Arvin to live under a better-suited environment for his health conditions, BoBo decided to have Arvin stay in Scotland permanently. To take care of Arvin, BoBo’s wife applied for an HKSAR passport to ease up traveling difficulties between Hong Kong and Scotland, but the Hong Kong Immigration Department declined her application for unknown reasons.

In August, BoBo and his wife will go to Scotland to apply for permanent residency and British citizenship. BoBo will also end his businesses in Hong Kong and move them to Scotland. BoBo said, “I’m at the peak of my career right now, and I really don’t want to leave Hong Kong! My oldest son is also attending college in Scotland, and I want to stay here longer to earn more money for my family. I don’t think I can do that anymore.”

However, BoBo does not wish to completely give up his Hong Kong entertainment career. He expressed that after he settles down in Scotland, he hopes TVB will renew his contract so he can continue to stay in Hong Kong.