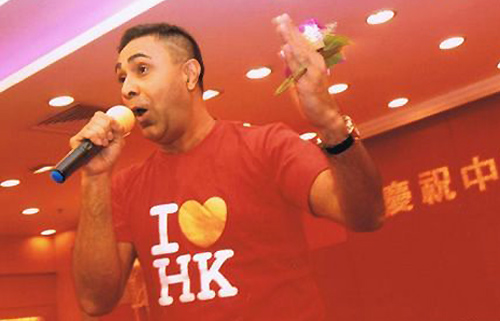 TVB Indian actor, Q BoBo (喬寶寶), created fervent discussion amongst the Hong Kong public when he announced that he would be immigrating to Scotland after his wife failed to apply for an HKSAR passport. Many fans of the actor wrote protests on Facebook and other social media sites to get the attention of the Hong Kong Immigration Department, but to no avail. As a result, BoBo would have to end his career in the entertainment circle and move to Scotland with his family permanently.

However, BoBo’s situation caught the attention of various media organizers that agreed to stage a stand-up comedy show for BoBo as his last farewell to the Hong Kong public. BoBo considered the show to be a perfect closure to his entertainment career.

BoBo entered the industry six years ago. Although he specializes in comedic performance on variety shows and dramas, this show will be BoBo’s first stab at stand-up comedy. BoBo exclaimed, “To be honest, I am really scared! I’m scared that I’m not funny enough! It would be pretty terrible if a stand-up comedy isn’t funny. On the other hand, I’m worried about the ticket sales. Luckily, I have many friends and colleagues that are supporting me. So far, one third of the pre-sale tickets are sold!”

BoBo’s stand-up comedy concert is titled, Q BoBo’s Stand-Up Comedy – I am a Hong Konger <喬寶寶棟篤笑之我係香港人>. BoBo will talk about his experiences of being an ethnic minority in Hong Kong – talking from his birth, adolescence, first love, life as an employee of the Hong Kong Correctional Services Department, to becoming an entertainer, and the days when his wife was rejected of the HKSAR passport.

“The entire show will be filled with my own experiences. Lee Lai Ha (李麗霞) helped me get Lam Chiu Wing (林超榮) to write the script. Hopefully the results will be good!”

The show will be held in November 2012. Unfortunately, his wife and two sons are unable to leave Scotland, so they will not attend his show.