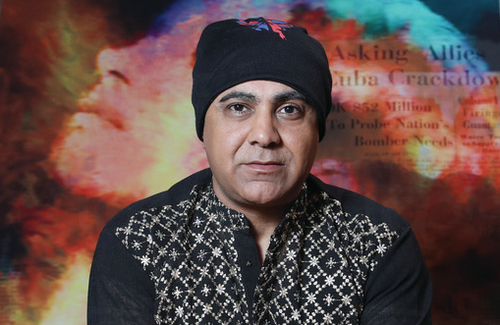 TVB Indian actor Gill Mohinderpaul Singh, better known as Q BoBo (喬寶寶), was born and raised in Hong Kong, but he moved to Scotland with his family in early 2013. Though he returned to Hong Kong alone later that year, Q BoBo quietly went to Scotland for a month in July. It turns out he was sent to the hospital for emergency surgery because of a 99% cardiac embolism and had to recuperate. Having been on the verge of life and death, Q BoBo now understands the importance of his health.

According to media reports, Q Bobo suffered from chest pains and severe shortness of breath one night. The father of two was immediately sent to the emergency room for treatment. One of his heart blood vessels was embolized 99%, so the doctor immediately operated on him. After he recovered, he, who has always been on the heavier side, was determined to lose weight, quit his bad habits, and maintain a healthy body for his family.

Immigrated for His Family

Q BoBo rose to fame after he participated in the TVB program Minutes to Fame <殘酷一叮>. He appeared in TV dramas and movies, but he left Hong Kong at the peak of his career in 2013 to immigrate to Scotland with his family since his wife couldn’t apply for an HKSAR passport.

The actor ended up returning to Hong Kong later that year, but his income was reduced to half because of the bad market. Luckily, his fruit shop, a joint venture with a friend, has been doing well. He opened three branches within five years.